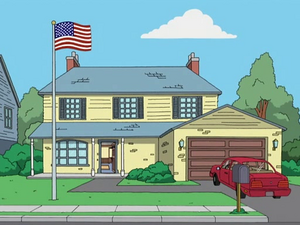 The Smith Home in Langley Falls, Virginia has a number of various addresses:

1024 Cherry Street is the address of the Smith house given in the pilot episode.

"Mine Struggle" gives the address as 1018 Cherry St.

"Funnyish Games" makes a meta joke out of the various addresses when Francine needs it as the passcode to deactivate a killer security system Stan installed. 416 Cherry Street is the answer she needed.

The house contains at least one sub-basement used a dungeon/sex room by many of the characters in "The Missing Kink". Roger is able to access the sub-basement by way of an elevator that reaches from his bar in the attic.

The Smiths' basement, which holds the laundry room, Goo Capsules, among other things.

As revealed in "The Vacation Goo", Stan borrows a series of "Goo Capsules" from the CIA annually, which is revealed to be able to alter a person's mind, as Stan used them to simulate his family having vacations while he would watch football games with Klaus.

Where Francine washes everyone's clothes. Contains a drying rack, a washing machine, a dryer, and other stuff.

The First Floor of the Smiths' house, which is one of the most often seen areas in the show.

The main entry area into the house. Contains a TV set, a stereo, among other stuff. It also has the stairs to the upper floors.

Where the Smiths' eat their meals. Has a very long table. It is usually only used on special occasions such as in "Meter Made". It is also used for dinner sometimes.

Where the food is made by Francine. It has a window that overlooks the back yard, showing Steve's tree house, the pool, and other areas. It is also where the family eats most of their meals. Also contains the kitchen bathroom, a one-shot appearance in "Of Ice and Men" in which Stan uses to hide his figure skating tunnel, with the password to the tunnel being a fart.

This is where Stan stores his car. It was briefly transformed into a sweatshop housed with illegal aliens that were "hired" by Stan so that he could finish his "Cele-Bear-tions" in "American Dream Factory", with the workers also being used as servants by Francine.

When Hayley is blamed for defacing the town mural and faces the wrath of the town in "The Mural of the Story" when it was actually botched by Stan, he tries to turn the garage into "Hayley's Hideaway," complete with a boom box and a Sopranos pinball machine.

The Second Floor of the Smiths' house, with the stairs to Roger's attic located on the side of the house, near the stairs going downstairs.

Where Stan and Francine sleep, read, and have wild sex. To the right is a private bathroom that is attached.

Where Hayley prepares her plans against society (or democracy, according to Stan), listens to "My Morning Jacket", and sleeps. She is now sharing it with her new husband, Jeff Fischer.

Where everyone does their business.

Where Stan or others go to relax. It contains a mini-library, a mini-bar, and a window looking into the backyard. It is also called the study. It contained Stan's collector's plate collection in "With Friends Like Steve's". It was Francine's practice room for her comedy routine in "White Rice" until Stan erased her memory.

The last floor in the Smiths' house, with Roger living in its entirety. Also contains various stuff stored up there by the Smiths.

There is an attic window on the left side of the Smith house, just under the left chimney. When seen from a distance, as in "Rough Trade", it appears to be a 4-paned, light-blue-shaded window with no shutters. However, when seen close up, as in Gorillas in the Mist, it has shutters. The close-up view usually precedes a scene in Roger's room.

Sometimes, when the left side of the house is shown, the attic window appears and disappears during the same episode. In "Rough Trade", a night scene features the window lit up prior to a scene with Stan in the attic. Later in Rough Trade, the window is missing just after Roger has hit Francine in the eye.

In "Helping Handis", the attic window appears prior to a scene in which Stan goes into Steve's room. Later in the same episode, the window is missing just before Roger comes into the living room to clean. Still later, the attic window reappears during the house party when some kids are shown standing on the roof of the Smith house.

The entire attic. Contains Roger's Place, his bed, a window that looks over the entire back yard, and various weird objects stored up in the attic that Roger uses as furniture, or for his own means. Also contains the address to Roger's spaceship, which is hidden away in storage as shown in "Weiner of Our Discontent".

A homemade bar set up by Roger and the Smiths, with Roger employing his excellent bar keeping skills to use. Has been used frequently by the Smiths, with all of them having attended it at least once.

Next to Roger's Place is an elevator which he can use to access the sub-basement dungeon/sex room in "The Missing Kink". 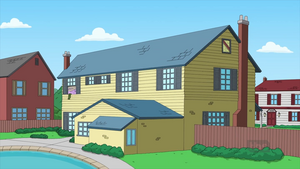 A large tree house in the backyard that Roger, Steve, and Steve's friends have played in. Was briefly destroyed by a lightning strike in "Irregarding Steve", but has since then been rebuilt.

The Smiths have a backyard pool with a retractable cover that occasionally is opened or closed at inopportune moments such as when Francine falls into the swimming pool in "The American Dad After School Special" where she finds that Stan has been hiding food in it and Stan knocks Hayley in and closes the cover while listening to My Morning Jacket in "My Morning Straitjacket".

Stan maintains an underground, high-tech safe room in "The Full Cognitive Redaction of Avery Bullock by the Coward Stan Smith" which he and Avery Bullock use to try to prove that Bullock is being set up by Agent Crisp.

A large American flag pole which is always at full staff. has been destroyed in various occasions, such as in "Home Wrecker", when a brick wall that Stan built around the house fell onto it. After the family tries a new spaghetti sauce in "Shell Game", an Italian flag replaces the American one. 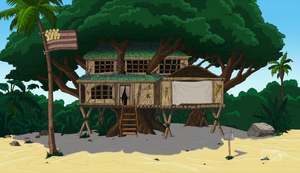 Retrieved from "https://americandad.fandom.com/wiki/Smith_Home?oldid=86650"
Community content is available under CC-BY-SA unless otherwise noted.