Start a Wiki
watch 02:02
'American Dad!' Recap: Shell Game
Do you like this video? 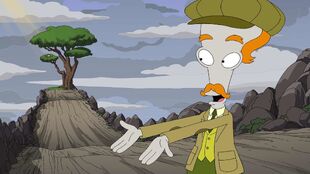 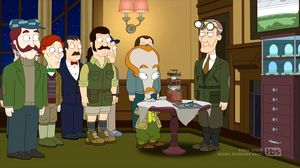 While Steve and Roger are watching birds, they observe a strange man steal an egg. When they follow him, they find he has a large cache of eggs but get no help when they try to report the theft to the police. They do get a tip to check with an expert on eggs at Groff Community College where they find a secret society of compulsive egg thieves called The Order of the Hand and Nest that has been preying on the museum's collection. Roger joins the society to Steve's disappointment, so he joins up with a counter team to frustrate their efforts. 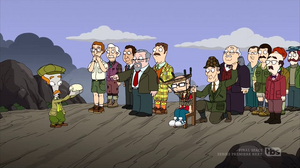 To prevent Steve and his companions from stopping their effort to collect an extremely rare egg, they kidnap him and take him to Skoal Island. There, they plan on killing Steve, leaving Roger to steal the egg for himself. He comes to his senses in time to ditch the egg as the society rushes to grab it, falling over a cliff in the process. After Roger frees Steve, he momentarily falls for the lure of the egg as well and tries to grab it from the cliff edge where it is located. Roger tries to help but their efforts send it over the side where the mother eagle rescues it, leaving Roger and Steve sail off the island past the broken and drowned bodies of the society. 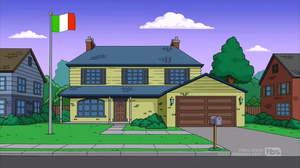 Meanwhile, Francine finds a coupon for a new brand of zesty tomato sauce instead of her usual bland sauce and decides to give it a try. Stan timidly gives it a taste but soon he and the entire family digs in, adopting the mannerisms of an Italian family as well. As Steve faces death at the hands of the society, he has a flashback of his family immigrating from Italy and experiencing life in the 50s, including the death of his friend Snot to a car bomb, leaving him to wonder what was in the sauce.

Retrieved from "https://americandad.fandom.com/wiki/Shell_Game?oldid=78573"
Community content is available under CC-BY-SA unless otherwise noted.