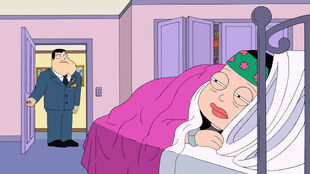 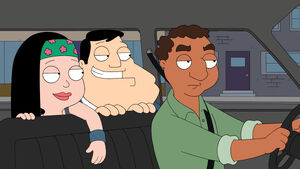 When Stan gets left out of a CIA inner circle, he takes out his anger on Hayley who wants her breakfast fixed. He begins to worry that Hayley hasn't developed any survival skills, he demands that she get a job and pay rent. She gets a job at Roger's Place. When Francine becomes worried, she sends Stan up where he observes the dregs that populate the bar but also finds Avery Bullock spending time close to Hayley. Bullock talks her into drinking with him as Stan gets the idea to use her to get closer to Bullock.

At CIA Headquarters, he shows up with tricks picked up while Bullock was with Hayley but returns home to find her hungover. He tries to get information from her but she refuses to talk except for considering quitting. Stan talks her into keeping her job to stay close to Bullock. Stan tries to plant a microphone near Hayley to learn more but finds she is already drunk. He begins to reconsider making her keep working but stops when Bullock arrives. He continues to get inside information on Bullock's likes as the job takes its toll on Hayley until he cracks the inner circle. After Francine finds Hayley has developed a drinking problem, she calls Stan and tells him that Hayley is in rehab. In a CIA inner circle meeting, Bullock announces that they need to kill Hayley for learning too many secrets after sending Stan out of the room, assuring him that they have no such plans although he listens outside and learns of their lie.

Stan decides to enter the rehab center to protect Hayley, but in order to get past security, he has to get drunk first. After loading up at the Welcome Back Liquor Store and crashing the gate at the rehab center, he has to sit through one of Roger's Dr. Penguin sessions where he opens up that he used Hayley. As the CIA bursts in, Dr. Penguin charms the agents long enough for Hayley and Stan to run. They make their way to the roof where they drink to numb themselves to jump and escape in a nearby cab. The CIA takes out the cab and Hayley and Stan make their way to a dumpster and to a pancake house until they are found again. They end up on another rooftop where they are trapped by Bullock where Hayley reveals that she saved all of the details he told her and threatens to reveal them if she is killed. Bullock lets her go but kicks out Stan from the inner circle and Stan admits that she can take care of herself. 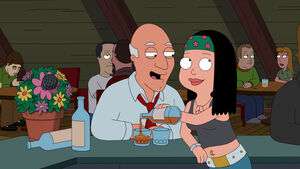 Meanwhile, Klaus sets down to watch Das Boot but is surprised when Snot and Steve are not aware of the references to German folklore. He relates the tale of The Little Girl and the Little Person but finds he has to tell other tales to explain more references. The boys try to watch Das Boot without Klaus but he gets the last copies at the rental store so he can join them as the clerk is sucked into his tales.

The episode ends with a public service announcement from the “actors” that play Stan and Hayley about drinking. Klaus, the boys and the clerk finish watching Das Boot after finally getting enough of the references to them, only to have everyone wonder why the Germans and the Americans were fighting in WWII.