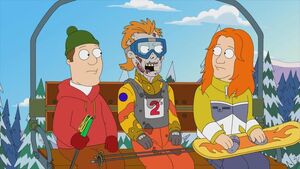 Shaun Roger White (born September 3rd, 1986) is an American professional snowboarder and skateboarder. He is a two-time Olympic gold medalist and has received numerous other sporting awards.

White voices himself in "Da Flippity Flop" when he gets tired of waiting for the group chairs at Jump City! and wants Jonny Moseley to join him in the single riders line, Mosley has some reservations, noting he always ends up with a weirdo. While Mosley ends up with Stan, occupied by Klaus' personality, Shaun ends up with Stan in Klaus' decaying human body. After Shaun acknowledges that Mosley was right, Mosley flips him the bird.

Roger claims that he is "friendsly" with Shaun White in "Independent Movie".