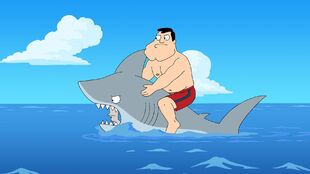 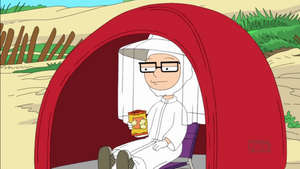 During a family trip to the beach, Stan gets excited when he spies people using water rocket boots to fly above the waves. But when he tries to get Steve to try it with him, he refuses to get in the water due to his shark phobia. Stan shares his problems with Roger and together, they hatch a plan to take Steve out on the water to be brave with a shark who would really be one of Roger's personas. Things start off as planned, with Steve smacking the 'shark' on the nose. But when he celebrates his victory with trash talk, Roger takes offense and jumps out of the water in the shark costume and bites his arm off. They get him to the hospital where Roger coughs up the arm so that they can reattach it. When Stan sheepishly approaches Steve, he discovers that his brush with death has taken away all of his fear, although he crosses the line from fearless to reckless. 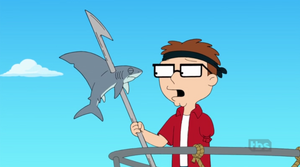 Finding him in a fight club, they admit their deception, which drains the courage right out of Steve. But when they try to visit him in the hospital, they find he has escaped and is determined to kill a shark on his own. But when he ends up killing just a little baby shark, he finds himself under attack by the parents. Stan and Roger come to the rescue, and while Roger is being mauled, father and son are able to escape using water rocket boots that are kept onboard the party boat. 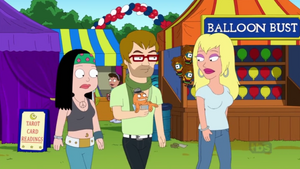 Meanwhile, Klaus is bummed out when his car breaks down, but Hayley's friend Danuta, who is visiting, finds him attractive. After being reassured that he isn't being pranked, Klaus excitedly encourages Hayley to set them up on a date, but when he calls her, he comes across as creepy. Hayley reluctantly agrees to make it a double date with Jergen to the county fair. But when he becomes completely insufferable in an attempt to win a prize for her, she ends up hooking up with Jergen. After nearly mistaking Hayley's concern for affection, he tosses the Munion aside where it tangles in the gears of the Gravitron ride, sending it spinning off of its base. Despite this, he finds everyone is apathetic to the situation since it doesn't involve them.

Retrieved from "https://americandad.fandom.com/wiki/Shark%3F!?oldid=92607"
Community content is available under CC-BY-SA unless otherwise noted.