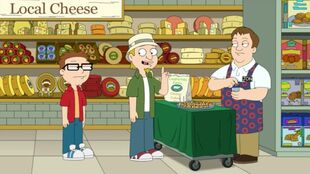 Shakedown Steve
Steve and Jeff try to bond as brothers. 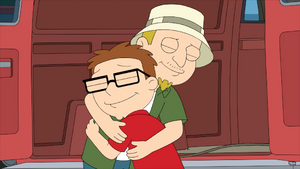 When Steve gets lonely because he doesn't have a big brother to look up to, Hayley suggests that he hang out with Jeff, who shows him how to run mild scams on people to collect food. Steve isn't impressed as they pull into a parking lot until he finds out it's the pre-party for a Phish concert and Jeff is using the food he scammed to sell for tickets. Steve is welcomed by Jeff's hippie friends and talks Jeff into going on the road selling the sandwiches using his business knowledge. At the end of the tour season, Jeff is ready to pack it in, but Steve wants to tackle one more giant festival.

To get the money they'll need to afford to sell enough sandwiches for festival tickets, Steve gets a loan from the shady Nitrous Mafia, but when he talks Jeff into going, Steve finds his newly purchased food stash has been eaten by rogue hippies. The mafia kidnaps Jeff when he tries to talk to them and takes him to the festival to make him work off the loan. Steve manages to follow by getting help from a well-off Phish fan that the others deride, and they find that the mafia has managed to sneak in their vendors past security by dressing them in inflatable costumes, from which their customers would suck nitrous oxide from. Steve manages to locate Jeff and tries to get him to escape, but Jeff refuses, knowing that he can't escape the mafia cleanly. Steve tries to get the group arrested by exposing the costumes, but they manage to escape by inflating them to the point that they're lifted away from the festival. By getting everyone to point skyward and ask for a miracle, the mafia suddenly find themselves struck by lightning and are brought crashing back down to Earth. 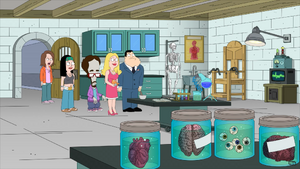 Meanwhile, Stan wins a discount to an escape room. After enduring the hokey introduction, Hayley tries to bolt for the door as an escape and is stopped. After six hours, they get comfortable and decide they don't want to leave, despite the host's insistence that they try to actually escape. After several weeks, she tries to starve them out, but they get food snuck in to them. After a month, she declares that they've had to go out of business since they couldn't rent the room to anyone else, and have sold out to a computer server company. As the Smiths find themselves trapped in the room, surrounded by giant computer terminals with the heat building up, they realize that she was the evil mastermind that they needed to escape from.