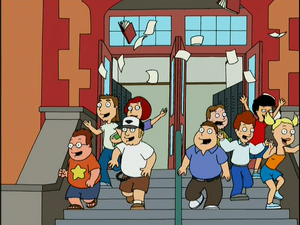 Seth Rogen (Born April 15, 1982) is a Canadian actor, comedian, screenwriter and film producer. Rogen began his career doing stand-up comedy for four years during his teens. After landing a job as a staff writer on the final season of Da Ali G Show, Rogen was cast in a major supporting role and credited as a co-producer in The 40-Year-Old Virgin. He has also provided voice talents in Family Guy, Shrek the Third, Kung Fu Panda, and Monsters vs. Aliens.

Seth provides the voice of one of the students in "Camp Refoogee".

According to the DVD commentary, Seth Rogen was originally going to voice Etan Cohen in "Bar Mitzvah Hustle". The American Dad! team chose not to use his voice as they deemed that it was too deep and not 'Child-like' enough, so they went with Seth Green.

Steve plays a game with the guys in "Home Wrecker" in which involves Seth Rogen, Megan Fox and a single chair.

Retrieved from "https://americandad.fandom.com/wiki/Seth_Rogen?oldid=53775"
Community content is available under CC-BY-SA unless otherwise noted.