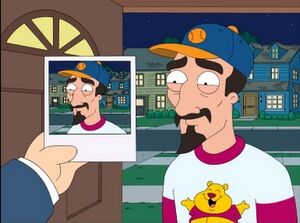 Sergei Kruglov is a former KGB agent. In 1988, Stan and Sergei were captured by their respective opponent sides, but during the prisoner exchange Stan was recaptured by the Soviets. After the Berlin Wall fell and the Soviet Union collapsed, Sergei's wife left him for a West German tennis equipment salesman and his son became an entrepreneur who sells Halloween costumes for dogs. Vowing to steal Stan's son for communism, he eventually moved to Langley Falls after Mr. Hallworthy died. Sergei then helped Steve construct a model rocket, while also teaching him in the ways of communism. Stan then wins Steve back, and Sergei helps Barry construct a rocket which wins the school's contest. Towards the end of the episode he acts like a normal neighbor to Stan coming over both to threaten him and then give Stan mail belonging to him that was in his mailbox.

Sergei is a man obsessed with communism and getting revenge on Stan in "Red October Sky" after Sergei's son grew up to sell Halloween costumes to dogs as his job. He plans to do this by eventually making a "Stew seasoned with revenge". Despite this, they do seem to get along, such as when Sergei dropped off Stan's mail that was accidentally dropped off in his mailbox where only moments before he threatened to get his revenge.

In "Phantom of the Telethon", Sergei trains Boris the Russian Circus Bear.

In "Roy Rogers McFreely", we see that Sergei is an esteemed member of the Homeowners Association, a group in charge of making decisions, rules and regulations for the residents of Smith's neighborhood.

Sergei appears on the bank of monitors for Project Toilet Cam in "Paranoid Frandroid".

Sergei attends Tuttle's eclipse party in "Stan & Francine & Connie & Ted". He also appears as a photograph on a bulletin board in a 1980s Miami CIA office in "100 Years a Solid Fool".

Sergei is voiced by Steve Hely.

Retrieved from "https://americandad.fandom.com/wiki/Sergei_Kruglov?oldid=86530"
Community content is available under CC-BY-SA unless otherwise noted.