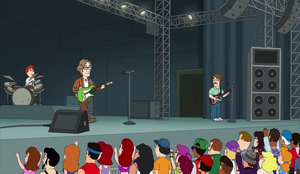 Dan Wilson provides his own voice in singing "Closing Time" at the 90s Fest in "The Witches of Langley". When he objects to Steve lurking backstage in preparation of enslaving everyone, Steve uses his witchcraft power to explode his head.