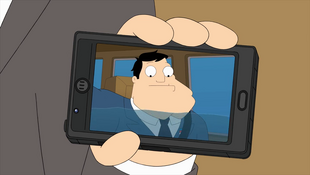 Seizures Suit Stanny
Stan suffers the side effects of taking a seizure medication. 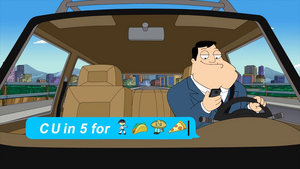 Stan allows Hayley to drive while he snacks. As Hayley tries to text while driving, Stan lectures her about it and insists that there will be no more texting in the family during any activities. At home, Francine tells about her day on her phone to a friend until she notices she has no caller as Stan arranges to have the signal cut off from the house as Jeff heads off to his new job as a traveling product tester. Stan complains to his work friends about everyone texting and they teach him about emoticons, making texting fun for him. He starts texting everywhere although he continues to ride Hayley about her texting. Texting while driving, Stan gets distracted and drives off a bridge.

In the hospital, he is visited by his family and he covers up the cause of his accident, blaming it on a seizure. The doctor they bring in gives him a quick confirmation and he is prescribed meds. Despite his story, Klaus doubts his story although Hayley uses it to vow to stop texting as she gives him his pills. He continues to blow Klaus off as Jeff returns from his job. Taking the last of his meds, they head off together and Jeff reveals that he knows the truth having received his last text. Trying to silence him by making an embarrassing text of Jeff's butt, they drive off the bridge together and Stan starts to save Jeff, then plants him back in the driver's seat and calls for others to save him, blaming their crash of Jeff texting while driving. 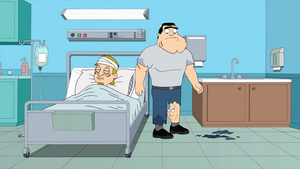 Back at the hospital, Jeff is in a coma. While there, the doctor ups Stan's seizure medication and he has a side effect of a hallucination who tries to convince him to kill Jeff to keep the secret. Figuring that the only thing they need to do is destroy the cell phone mainframe, Stan heads off, the meds also giving him the appears of Frankenstein's monster. Going to the store, Stan crashes around trying to rip the mainframe apart until Hayley calls that Jeff is awake, Returning to the hospital, he crashes through the wall in his car and crushes Hayley, confessing over her broken body what he has done, as the doctors tell the real, unscathed Hayley that Stan is still hallucinating from his meds and in reality has destroyed a Poweraid soft drink machine. 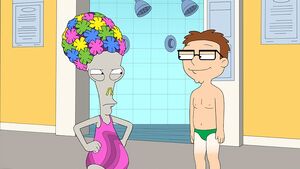 Meanwhile, Steve goes to see Roger about flunking his tests despite doing well in practice tests and he explains that he has performance anxiety. He takes him diving in the family pool and he does well in private, then takes him to a public pool where he is placed in a speedo. Hoping to dive unnoticed, he is picked on by both attendees and Roger in disguise. Making his dive after a long delay, Steve crashes and burns, but back home, Roger dismisses it as he can always return home to his pool and avoid his daily troubles, including the jerks using the public pool.

In an epilogue, Stan reads a eulogy in a grocery store for Hayley while still suffering the side effects of his medication as Hayley and the doctors allow him to continue for their amusement.