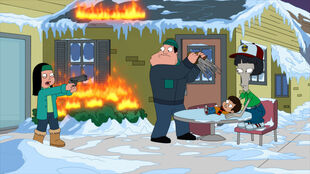 Hayley intends to protect her child

Season's Beatings
Hayley and Jeff adopt a child who turns out to be possessed.

Roger's Disguise: Ace Chapman from "I Am the Walrus" 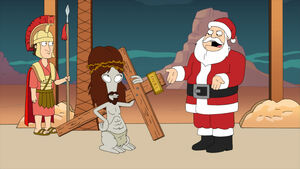 Stan hears of the church putting on the story of Christ at the mall and rushes to get the lead role, only to be told by Father Donovan that he is too fat. He is instead given the role of Santa Claus but when he finds out the Roger got the role of Christ attacks and beats him senseless. Shocked at the attack, church leaders around the world universally agree to kick Stan out of all religion. When Stan asks if there is any way to stay in the church, he is told it is almost impossible, given that the only three acceptable ways are to kill the anti-Christ, discover the Holy Grail, or donate large sums of money. 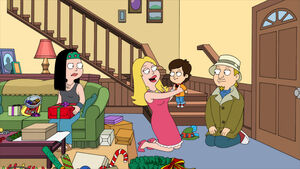 Meanwhile, Jeff tries to talk Hayley into adopting a child. Hayley says no but Jeff adopts a child anyways and names him Nemo. Hayley at first is angry but is quickly charmed by Nemo. While Stan is watching Nemo, he discovers he bears the numerals 666 which is considered the mark of the beast and is convinced the child is the Anti-Christ. Stan gets Father Donovan to come see the marking and they agree to go to the orphanage where Nemo came from only to find it burned to the ground. as they search the remains of the orphanage, Father Donovan discovers Nemo's birth papers. Nemo senses the Father's discovery and causes the orphanage to collapse on him, severing his legs. Father Donovan is able to share that Nemo is indeed the son of Satan before he dies.

Stan, Roger and Jeff travel to the Vatican to obtain a set of sacred daggers to kill the anti-Christ. Although Stan is barred from entering, Roger and Jeff are able to enter the catacombs to search. Nemo sees them through the eyes of a rat and causes the catacombs to flood, washing Jeff away. Roger climbs out and finds the daggers and escapes with them after attacking a Cardinal. Roger and Stan return home to discover Francine putting up Christmas lights while a possessed Steve scampers around. When Stan tells Hayley that they need to perform a ritual killing of Nemo, she fights to protect him and ends up shooting Stan. Stan awakes in the hospital and finds everything is back to normal. He was accepted back into his church when it tuned out that Roger's eggnog "pimp" cup was really the Holy Grail. Nemo was sent off to Alaska to be raised by Sarah Palin and become the future Anti-Christ.

Retrieved from "https://americandad.fandom.com/wiki/Season%27s_Beatings?oldid=79568"
Community content is available under CC-BY-SA unless otherwise noted.