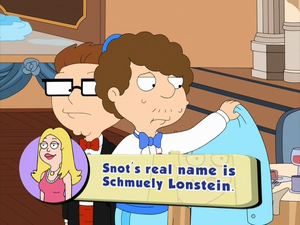 Schmuely "Snot" Lonstein is a student who attends Pearl Bailey High School with Steve and their other friends Barry and Toshi. Snot is a nickname given to him by the group. He lives with his mother Esther Lonstein.

Snot is arguably the second most normal of the group of friends, being perhaps less confident than Steve, but is otherwise a fairly normal teenager.

Snot and Steve met as kindergartners at Reagan Elementary in "Mom Sauce" and have been close friends ever since.

Snot once had a falling out with Steve over his affair with Steve's octogenarian girlfriend, and they both agree that she is sexy. Other fights have included Steve stealing money from Snot to support his energy drink addiction, resulting in Snot as well as Toshi and Barry attacking Steve physically. The most damaging factor that endangered Snot and Steve's friendship was when Steve sought to ruin another boy over a fight of his girlfriend Debbie, to which Snot mistakenly was accused of stealing from this boy and faced excommunication from his Jewish synagogue. Snot was acquitted when Steve confessed that he stole out of spite and Snot had nothing to do with it. Snot was clearly aghast at Steve for putting him in a perilous situation, but their friendship resumed when Steve sold much of his old toys in order to raise money to provide an excellent Star Trek-themed Bar Mitzvah for Snot. A lesser rivalry emerged over an attractive Russian girl named Svetlana, which was between all four boys, not just Snot and Steve. The fight was resolved when it was decided Toshi was the most suitable man to marry Svetlana. Snot has had a short relationship with Jenny Fromdabloc, one of Roger's personas where he believed he lost his virginity, but it turned out Roger was using a stress ball with a cut in it to fake the sex. In the end, Roger fakes his own death by using his ability to move very fast to make it seem like he got hit by a bus.

Snot has a dog named Dreidel whom Steve uses with Snot to present his argument that he could have a dog in "Stan's Best Friend".

Snot has a puppet of Fozzie Bear he tries to use to amuse Steve in "License to Till". He later shows up at the hospital where Hayley has severe kidney damage with his Fozzie Bear puppet and attempts to cheer up Stan and Francine Smith in "The Kidney Stays in the Picture" but reveals he's really there because his grandmother is dying. He also demonstrates he can perform a Kermit the Frog voice in "The Unincludeds".

Snot has a ambiguous relationship with Steve. In "License to Till", Steve and Snot kissed at the end. In "A Ward Show", Snot whispered to him regarding their kiss oath meaning nothing and in "Virtual In-Stanity", Steve mistakes Phyllis' comment regarding Chelsea that a curly haired person wanted to dance for Snot. In "American Stepdad", Steve and Snot find themselves holding hands. When confronted by Stan in "Why Can't We Be Friends?", Steve denies their being gay with a limp-wrist, but he later reminisces over a strip of photobooth pictures that includes them kissing although Snot's hand keeps their lips from touching.

Snot pretends to be gay with Barry in order to get out of a relationship with Hayley in "The Missing Kink", leaving Barry heartbroken when they part. He also states that he will not be "coming out" until he is "perfect" in "Hayley Smith, Seal Team Six".

Snot reveals that his father ran away from his family five years previously on a trip to Home Depot in "The Adventures of Twill Ongenbone And His Boy Jabari". However, "Demolition Daddy" reports that Lonnie Lonstein left the family to drive demolition derbies in England after an injury affected his ability to look over his right shoulder.

Curtis Armstrong voices the character of Snot, parodying his role from the film Revenge of the Nerds, where he played Dudley "Booger" Dawson. American Dad! makes a meta joke in "Introducing the Naughty Stewardesses" in which Snot denies ever having seen the film.

Snot implies that his grandparents were killed in the Holocaust in "I Ain’t No Holodeck Boy".

Trish and Suze of Morning Mimosa award Snot with a three-day "celebration" due to being poor, having been recommended by Steve in "Roger's Baby". But when the latter finds that Snot resents being treated as poor, the two conspire to hide on the third day. Their efforts send Trish and Suze into a frenzy at having their event ruined, as they chase the pair for the day.

Steve mentions that Snot was invited up to Pete Rose's hotel room in "Crystal Clear".

Snot is shown to be diabetic in "Businessly Brunette".