For a complete script, see: "Scents and Sensei-bility" on the Transcripts Wiki 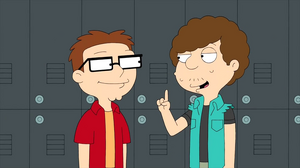 Steve: You thinkin' what I'm thinkin', Snot?
Snot: We visit him in juvenile hall every month until he gets out and then we all move in together?
Steve: No! We take karate at his dojo.
Snot: Which we can use to get Martin out of juvie, brilliant!
Steve: No, Snot. I kinda just thought we'd do this new thing. Forget Martin.
Snot: [gasps dramatically] Did I like Martin more than you did!

[Roger insults sensei Tom for living in his dojo]
Steve: Well, you technically live in yours.
[Roger moves as if throwing a punch and holds up two fingers]
Roger: Lesson two. Don't worry about where I live.

[As Steve's training consists of tending to Roger's needs including mixing drinks, Roger is pleased and orders four more]
Steve: But the tournament is in twenty minutes.
Roger: Don't worry about time. Let me worry about time.
[Cut to Roger driving frantically]
Roger: Shit! Shit! Dammit! We're so fucking late!

Retrieved from "https://americandad.fandom.com/wiki/Scents_and_Sensei-bility/Quotes?oldid=89917"
Community content is available under CC-BY-SA unless otherwise noted.