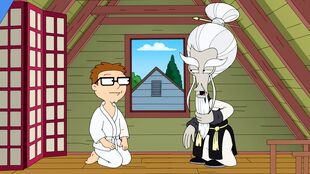 Scents and Sensei-bility
Steve and Snot try to defend themselves against bullies. 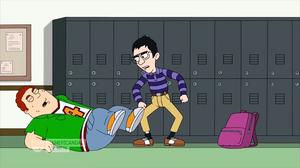 Trying to dodge bullies by shadowing a bigger nerd, Snot and Steve are surprised when the nerd kicks butt and discover that it is due to taking karate. They sign up and discover the sensei teaches his students to use their anger to focus their power. Snot becomes a top student but Steve refuses to use anger and flees from the class. Snot dumps Steve as a friend for his new tough friends. Snot gets in trouble and Steve tries to confront sensei Tom over his methods but finds he is forced to beat Snot in a tournament to shame him and have him dropped from the class. Steve goes to Stan but his advice is to use guns. Roger appears as a sensei to teach Steve.

After an unconventional training session, they barely make the tournament. Snot finds out that Steve intends to beat him in the finals but find they have been moved to face each other in the first round. Steve's passive methods end up getting his butt kicked and dismissed. At school the next day, the guy resign themselves to losing Snot but hear of him getting into yet another fight which will get him expelled. Steve's demonstration of using love and getting beat up by Snot's target shows Snot that anger isn't the way and Snot gives it up for the time being. 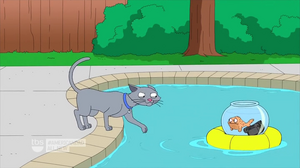 Meanwhile, Hayley plays with Klaus but when Francine and Stan arrive, they notice a smell and banish Klaus from the house. Klaus is forced to dodge cats and birds and even a lizard. When they all start to plot against him, Klaus tries to trick his way back into the house but fails. The family continues to smell him as Klaus uses the heat pump to send his smell into the house and force them out where he locks them out to face the cats and birds. Later, a large box is delivered to the house where Klaus believes that it is the family trying to trick their way back in. Willing to let bygones be bygones, Klaus opens it to discover the family has gathered the other animals and sent them in to take care of him. However, they are shocked when he ended up killing all of the animals.

Retrieved from "https://americandad.fandom.com/wiki/Scents_and_Sensei-bility?oldid=89231"
Community content is available under CC-BY-SA unless otherwise noted.