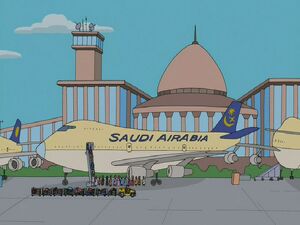 Saudi Arabia, officially known as the Kingdom of Saudi Arabia, is the largest Arab state in Western Asia by land area, constituting the bulk of the Arabian Peninsula, and the second-largest geographically in the Arab world.

Places in Saudi Arabia include:

Retrieved from "https://americandad.fandom.com/wiki/Saudi_Arabia?oldid=89157"
Community content is available under CC-BY-SA unless otherwise noted.