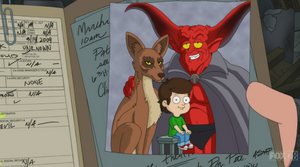 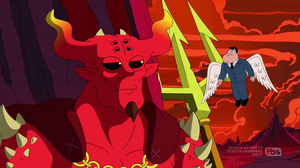 Satan is an embodiment of antagonism that originates from the Abrahamic religions. Since then, those religions have used Satan to refer to the Devil.

In "Season's Beatings", Father Donovan discovers that Hayley and Jeff Fischer's adopted son Nemo is indeed the offspring of Satan and a jackal that will one day become the Anti-Christ.

According to the fine print in a newspaper story about Fung Wah in "American Fung", he is rumored to have made a deal with Satan to acquire his wealth, but calls to Satan were not returned.

Stan gives the devil his soul in exchange for returning himself and Francine to life after they are killed and go to Heaven in "The Life and Times of Stan Smith".

In an effort to reunite their mothers in "A Roger Story", Steve and Snot die and go to Hell when Roger confuses a temporary acting poison for a more permanent one. In an effort to recover the boys, Roger escorts Francine and Esther Lonstein to Hell via an elevator located in Sub Hub. Satan agrees to free the boys, but insists that the mothers stick to their vow to stay together forever and keeps them in Hell.