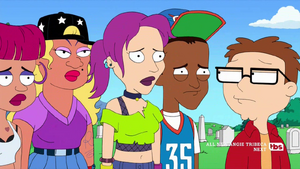 Sarah is one of the at-risk children in Mr. Deliver's class in "Stan-Dan Deliver".

She is seen in the crowd at 90s Fest in "The Witches of Langley", at the Shark's Nest in "The Long Bomb", kissing another girl at Groff Community College in "Shell Game", in multiple places in the arena during the Harlem Globetrotters game in "Klaustastrophe.TV", at the rap battle in "The Never-Ending Stories" and at the Washington Nationals games in "One-Woman Swole" and "Fantasy Baseball".

Retrieved from "https://americandad.fandom.com/wiki/Sarah?oldid=88350"
Community content is available under CC-BY-SA unless otherwise noted.