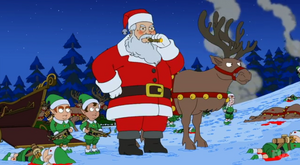 Santa Claus, also known as Saint Nicholas, Father Christmas, Kris Kringle or simply Santa, is the legendary and mythical figure who, in many Western cultures, brings gifts to the homes of the good children during the late evening and overnight hours of Christmas Eve, December 24 or on his Feast Day, December 6 (Saint Nicholas Day).

While Saint Nicholas was originally portrayed wearing bishop's robes, in modern times, Santa Claus is generally depicted as a plump, jolly, white-bearded man wearing a red coat with white collar and cuffs, white-cuffed red trousers, and black leather belt and boots. This image became popular in the United States and Canada in the 19th century due to the significant influence of caricaturist and political cartoonist Thomas Nast. This image has been maintained and reinforced through song, radio, television, and films. In the United Kingdom and Europe, his depiction is often identical to the American Santa, but he is commonly called Father Christmas.

When Stan cuts off Hayley's hair while she sleeps because she dyed it green in "Stan Knows Best", he keeps her asleep by whispering such things as Santa taking her to the Oscars.

Hayley and Stan sing a song about a letter to Santa in "Stannie Get Your Gun" titled "I Want a Gun for Christmas".

In "For Whom the Sleigh Bell Tolls", Steve accidentally shoots Santa with a gun Stan gave him despite Francine's objections that Steve was too young. Despite their attempt to hide the body, Santa is recovered and resuscitated by his elves and vows vengeance on the Smiths. The Smiths take refuge in a moonshiner's cabin, where they fend off an attack of elves, reindeer and snowmen led by Santa until Santa's army is forced to retreat at dawn, vowing to return the next year.

When Steve misbehaves in "Minstrel Krampus", his grandfather Jack Smith tells the story of how, as a boy, he captured the legendary Krampus, Santa's sidekick that punishes naughty children. Tired of Steve's brattiness, Stan allows the Krampus to go free but he kidnaps Steve and demands Jack be brought to him. But when Stan uses his CIA connections to free Jack, he instead flees, leaving Stan and Roger to try to make a deal with Santa who still bears a grudge but is willing to go along in order to kill the Krampus.

Meanwhile, Steve discovers that the Krampus only punishes children because he loves them and tries to set them straight and bonds with him, just as Stan and Santa arrive and Santa kills the Krampus before turning the gun on Stan. Jack, who has had a change of heart, takes the bullet meant for Stan. As Santa flees, Jack and the Krampus' blood intermingles, transforming Jack into the new Krampus. In addition, Santa is shocked to discover Jesus, who holds a permanent place on the "good" list, is Jewish.

When traveling through the wormhole in "The Longest Distance Relationship", Sinbad and Jeff Fischer turn into stylized characters including that of Santa Claus and Krampus.

In "The Two Hundred", Stan has a tattoo of Santa inside of a prohibited symbol, a nod to events in "For Whom the Sleigh Bell Tolls" and "Minstrel Krampus".

Santa kidnaps children and forces them to work in a mine at the North Pole in "Ninety North, Zero West". When Steve is accidentally kidnapped as well, the family sets off in pursuit, aided by Jack Smith/Krampus. Santa captures them all and reveals that his plot involves finding gemstones taken from the eyes of the Sumerian giant Humbaba, entombed at the North Pole that can give him supreme power. However, his plan backfires when Humbaba is reawakened, and sucks in much of the North Pole, including Santa himself. Steve manages to decapitate Humbaba with a Christmas train. Jack decides to take over Santa's Castle, but as wreckage from Humbaba's awakening is shown, Santa's gloved hand grasps the top of the giants torso.

In "Santa, Schmanta", Santa emerges from Humbaba and swears revenge on the Smith family but breaks his neck, killing himself. When Roger is upset, he drags Santa's corpse to show everyone he is dead and takes his suit but he ends up gaining his powers. Roger's abuse of his power to celebrate Hanukkah, causes Snot to conspire with the Smiths to reanimate Santa's corpse, with only partial success. They decide that they need his suit and note that he responds when they discuss the suit. Santa confront Roger in his castle, but in his fight, he burns the place down with oil and tries to flee with the family in his Lamborghini, though zombie Santa pulls himself on board and causes them to crash, allowing the suit to return to its rightful owner. Santa is changed back to normal and Stan tries to reason with Santa to forget their past but he refuses, so the family is forced to run him over in their escape. Once the Smiths are gone, he swears revenge again before changing things back to celebrate Christmas again.

Santa is voiced by Matt McKenna.

Retrieved from "https://americandad.fandom.com/wiki/Santa_Claus?oldid=92297"
Community content is available under CC-BY-SA unless otherwise noted.