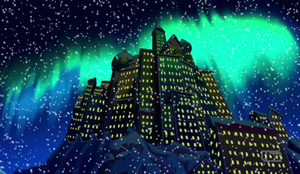 Santa's Castle is the one-time home to Santa Claus at the North Pole.

In "Ninety North, Zero West", Santa kidnaps children and forces the to work in a mine at the North Pole. When Steve is accidentally kidnapped as well, the family sets off in pursuit, aided by Jack Smith, who had given up being Krampus and became a bus driver in Baltimore. Santa captures them all and reveals that his plot involves finding gemstones taken from the eyes of a Sumerian giant, entombed at the North Pole that can give him supreme power. However, his plan backfires when the giant is reawakened, and sucks in much of the North Pole, including Santa himself. Steve manages to decapitate the giant with a Christmas train. Deciding to move up from Baltimore, Jack decides to take over Santa's Castle, Although Santa's gloved had appears from the torso of the giant in the end, signalling his return.

Retrieved from "https://americandad.fandom.com/wiki/Santa%27s_Castle?oldid=71036"
Community content is available under CC-BY-SA unless otherwise noted.