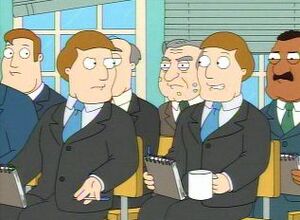 Sanders' Double is one of Stan's co-workers at the CIA. The CIA uses body doubles for it's agents to act as decoys. Other known body doubles include Jackson's double who was killed by Stan and Bill who acts as Stan's double.

Deputy Director Avery Bullock singles Sanders out for inappropriate use of his body double when he was too drunk to finish making love to a Jet Blue stewardess in "Pulling Double Booty". When Sanders accuses him of blabbing, he replies it was his first 'sloppy second'.