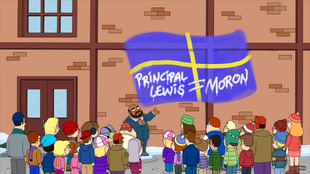 Roger's Disguise: Hooker from "The Hand that Rocks the Rogu" 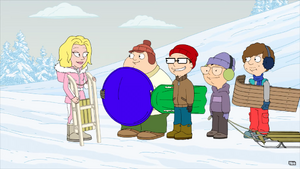 Steve and his friends go sledding with the new Swedish exchange student, Sllort, before school resumes until they are chased away by Old Man Powell. As they look forward to adding her to their crew, Billy warns them that they risk losing her to the cool kids. His prediction appears to be coming true on the first day of school, so Steve frames her with a defamatory message against Principal Lewis painted on the flag of Sweden. Sllort is expelled, but things take a more serious turn when more of the spray paint turns up with a dead body in the dumpster. 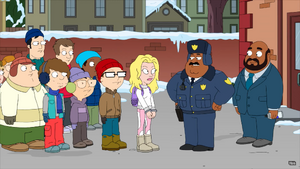 The guys want to come clean, but Steve talks them into searching for the killer themselves instead. Clues point them towards Old Man Powell, and a search of his property finds a hidden tunnel filled with carcasses and strange markings. Powell is also missing, which leads to the conclusion that he is the killer and Sllort is freed. However, Billy, while working in the police crime lab, discovers that the body was really that of Powell, and further examination of markings on Powell's body turn out to be Nordic runes. Skin found under Powell's nails turns out to be from Sllort, who is really a troll, Sllort being 'trolls' spelled backwards. She assumes this form at sunset, which is happening at that very moment.

The guys confess their frame job to her just as she turns into a troll, and she chases them into her secret lair. They manage to hide briefly, but are found out, and her attempt to use a support beam starts a cave-in, which knocks her unconscious and threatens her life. Steve insists that, troll or not, they need to save her, so they pull her to safety, but the delay costs them their own way out. When she charges towards them, they prepare to die, but she passes them and clears the exit. Outside, she admits that she decided to spare them since they saved her, and they ask her to join their crew. However, she turns them down since she knows her human form is hot and would rather spend time with the cool kids. 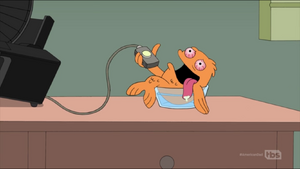 Meanwhile, Klaus turns up the heat because he feels cold, and the family considers it an act of rebellion. An animal behaviorist provides treats while clicking a button until he becomes hooked on the very sound of the clicker. Klaus develops a habit of clicking buttons to be satisfied, but when Stan and Francine leave Klaus for a night out, he plays with a slide projector until the button breaks. Klaus is desperate to find a satisfactory clicking device, which turns out to be the thermostat. Stan receives a notice of the increasing temperature in the house, which cuts short their alone time.