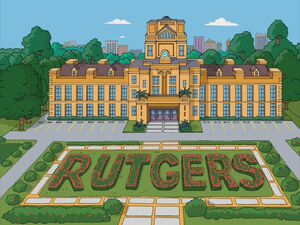 Rutgers, The State University of New Jersey (usually referred to as Rutgers University), is the largest institution for higher education in New Jersey. It was originally chartered as Queen's College in 1766 and is the eighth-oldest college in the United States. Rutgers was originally a private university affiliated with the Dutch Reformed Church and admitted only male students, but evolved into and is presently a nonsectarian, coeducational public research university that makes no religious demands of its students. Rutgers is one of only two colonial colleges that later became public universities.

Jessica and Tracy attend Rutgers University and take Spring Break at Roger's party in "Spring Break-Up". When Stan develops a crush on Jessica, he heads to Rutgers to convince her to keep partying with him but she declines telling him the party is over and she needs to get back to her studies. Jessica is a member of Theta Sigma (ΘΣ) sorority where her sorority sisters try to talk Stan into taking them out for Mexican food.