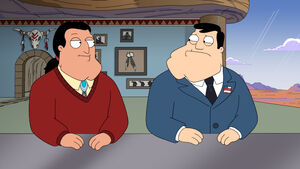 Rusty is Stan Smith's Half-brother on their father's side.

In "There Will Be Bad Blood", their grand father had a plot of desert land won by their Great-Great-Grandpa Smith and $20,000. Stan cheated Rusty to take the cash, leaving him with the land, which was unknown at the time to have vast copper reserves, making Rusty rich. Despite the wealth, Rusty was very modest about it, always maintaining a humble appearance and never making light of his good fortune, even when Stan who believed Rusty was poor, would constantly invite Rusty and his family over to his house for each Thanksgiving so he could gloat about his upper-middle class success. After finding out the truth after about Rusty's wealth, Stan became so envious, he deluded himself into believing he deserved Rusty's life.

Stan and the family then kidnap Rusty and his family, forcibly transplanting them to their old house while the Smith's move into theirs and poorly disguise it to make Rusty's family think its their home. Rusty and his security staff return and forcibly eject the Smith's, pledging to kill Stan if he returns. Still obsessed with wanting Rusty's wealth, Stan has a temper tantrum on the helicopter flight out, which knocks out the pilot causing the helicopter crash. As the mangled helicopter pilot goes off in search of help, Stan decides he can return to try to take the house from Rusty again. Following Roger's advice, they soon become completely lost. Freezing in the cold night, they are found by Jeff and Hayley.

Dining on a Thanksgiving dinner of turkey jerky, Stan realizes how much he really has and reconciles with Hayley, inviting her and Jeff to live with them. Rusty finds them and threatens to shoot Stan as they are still on his land. When Stan asks how much land he owns, Rusty responds a lot in an Indian-type response. Rusty is then startled by the returning helicopter pilot and shoots him instead, allowing the Smith Family to escape.

Retrieved from "https://americandad.fandom.com/wiki/Rusty?oldid=79792"
Community content is available under CC-BY-SA unless otherwise noted.