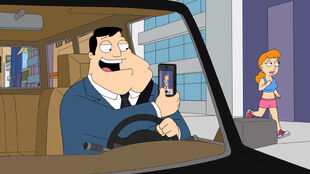 Rubberneckers
Stan tries to hide an accident from Francine.

Plot: Francine feels frisky after a night out but catches Stan eying the bartender. The next day, the guys at the CIA hit him for details and he admits he was caught looking at another woman. The guys teach him the art of “rubbernecking”: looking at women without getting caught. At home, he assures a skeptical Francine that he only has eyes for her. But on the way to work, Stan has an auto accident while taking a photo of a jogger with his cell phone and becomes afraid of Francine finding out. Stan makes up a story for Francine, but when he is confronted by Heinrich Brown, a ruthless insurance adjuster, he becomes nervous that his cover story of avoiding a dog may get him in trouble for fraud. 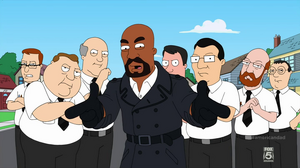 As Heinrich launches a thorough investigation, he finds that a camera only notes the jogger but dismisses it as insufficient pending an examination of Stan's car which still contains Stan's camera. Stan's CIA friends rush him down to the body shop, but Heinrich misses the camera in his investigation until it starts to ring. Heinrich gets to it first to talk to Roger and he discovers the picture of the jogger and proceeds with a fraud case against Stan. In jail, Steve is the only one who will talk to Stan who convinces him to stand up and be a real man. At the trial, Stan is confronted by a jury of married women as well as a female prosecutor who forces him to tell the truth. Inspired by the judge's admonishment of Francine's appearance, Stan asks for a short recess and has Steve take a note to Francine. Getting a thumbs up from Steve, Stan call in Francine as a witness and she arrives in a racy dress. As she walks towards the front, she catches the eye of every man present and Stan calls them on it. Francine also takes it as a complement and forgives Stan. However, Stan still gets six years in prison for insurance fraud. 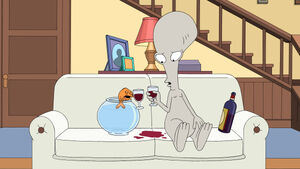 Meanwhile, to appease Francine, Stan buys a new couch as Francine wished. To celebrate, Roger and Klaus drink a toast and spit the wine on the new couch. They decide their only option is to sit on the couch forever. The guys remain on the couch while they pretend they are setting a new record for couch sitting, but their cover is blown by the insurance adjuster. Roger tries to blame Klaus but relents and calls Stan's cell phone to tell him the truth which is intercepted by Heinrich. In the end, Roger tries to use the remaining wine to paint the new couch the same color but runs out of wine before finishing. He decides to set fire to it and yells that they need a new couch.