For a complete script, see: "Roy Rogers McFreely" on the Transcripts Wiki

Roger: In your face with a can of mace. Make you cry all over the place.

Stan: When's the next homeowner's association meeting?!
Greg: A week from Monday.
Stan: Then I will see you in ten days! Stay at this emotional level until then! I know I will!
[Five days later, Stan is brushing his teeth in the bathroom]
Stan: This new toothpaste tastes exactly like I thought it would!

[Stan is woken at 4:30AM and finds a garbage truck driven by Charles is collecting his garbage]
Stan: Hey, you woke me up in the middle of a dream. I was in the "Sledgehammer" video and I was made of clay, and I was so flexible and I loved it!
Charles: Oh, that's a good video, yah. But the Homeowner's Association ordered earlier trash pickup, at this house only.
Roger: [Whispers from somewhere inside the garbage truck] Tell him seven days a week.
Charles: Seven days a week.
Stan: Roger?
Roger: [Whispers to Charles] Tell him no.
Charles:: No!
Stan: I can hear you, Roger!
Roger: [louder] Drive! Let's go!
[Charles pulls the garbage truck back into a driveway and then drives off. As he does, Roger is clearly seen hiding under the dashboard]
Stan: I can see you! I can see your whole upper body!
Roger :[Waves to Stan out the garbage truck's window] Good morning! [To Charles] Get me outta here, he's putting it together!

Stan: I propose that a warning label be placed on all horse radish that clearly states that if you ingest an entire bottle you will blow out your sphincter. Also, if anyone knows anyone who recently died with an intact size three sphincter, please contact me as I'm currently very low on the waiting list for a doner.

Hayley: That's how your beloved system really works!
Stan: What are you talking about?
Hayley: I think this symbol says it best!
[Hayley removes her jacket to show the "Ghostbusters II" logo body-painted onto her chest]
Stan: Ghostbusters II?
Hayley: What?! Ugh, I gotta stop smoking salvia before I got to the body-painting place.
Roger: I ain't afraid of no ghost! 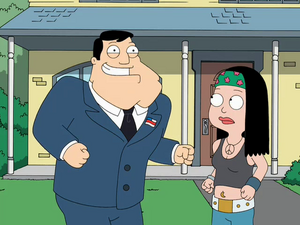 Hayley: We're gonna fight back with everything we've got!
Greg: She's right. And besides, I have nothing left to live for.
Terry: We have a child!
Greg: CAN'T I BE DRAMATIC FOR FIVE SECONDS?!

[One of Roger's Mexican henchmen is in hospital with a broken arm]
Roger: They send one of ours to the hospital, we send one of theirs to the morgue!
[Cuts to the hospital morgue, where Old Guy is dead]
Stan: Dammit, McFreely. How could you do this!
Hayley: McFreely didn't kill him, Dad, he died of old age!

Roger sits on and pins down a weak Stan]
Roger: You should've bought the grenadine. It was on the list!
Stan: It was unnecessary.
Roger: You think everything I want is unnecessary! You wouldn't let me adopt a rabbit, you never let me watch The Hills, you wouldn't let me get that Gael Garcia Bernal poster! His eyes are green and he's Latin, I NEED IT!!! So, mister tyrant, prepare to drink a Roy Rogers.
[Tries to force a can of cola and a bottle of grenadine to Stan's mouth]
Stan: No! I hate those! Get off me you fat hag! [Roger pours the cola and grenadine down Stan's mouth] This cola's warm!
Roger: It's been in my pants for three weeks serving as my meaty parts, sad to see it go really.

Roger: Well Stan, I guess it makes no difference now. [Takes off his McFreely disguise] It was me, Roger, the whole time.

Stan: Sorry I took so long. I farted pulling into the driveway and I just wanted to enjoy it for a while.

Stan: An above ground sprinkler on the front lawn! No sir! What's next, prostitutes rising out of the ground and spitting all over our lawns? Well, not in my neighborhood!

Retrieved from "https://americandad.fandom.com/wiki/Roy_Rogers_McFreely/Quotes?oldid=88102"
Community content is available under CC-BY-SA unless otherwise noted.