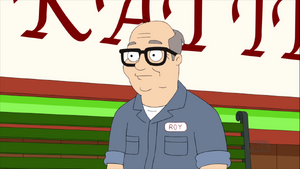 Royis a janitor at The Langley at West Langley mall in "Yule. Tide. Repeat.".

He saves Stan from being run over by a trolley car, and when the mall tree lighting ceremony results in most of the bystanders being killed, Stan finds himself in a time loop that starts at that moment.

When he concludes that his initial attempts to locate and save his family are doomed, as is stopping the ceremony itself, he consults with Roy as to how to cut the power to the tree. After several attempts and a misunderstanding by Roy that Stan is sleeping with his wife, Stan succeeds in cutting the power, but a steel stay cable for the giant tree snaps, and still kills everyone nearby.

As Roy points out that Stan's time loop is coming to an end, he also suggests that Stan's real mistake is not enjoying time with the family, instead of demanding a perfect Christmas.

Roy also reveals he's involved in a body-switching situation, and that he's actually a little boy.

Retrieved from "https://americandad.fandom.com/wiki/Roy?oldid=91960"
Community content is available under CC-BY-SA unless otherwise noted.