For a complete script, see: "Rough Trade" on the Transcripts Wiki

Klaus: If that were a real wish bowl it would be in the Ferrari of a 600 -year-old Incan on the way to his job as Jessica Alba's G-string.

[Stan and Francine in the kitchen]
Stan Did you get those Pecan Sandies I asked for?
Francine: Oh I'm sorry, I forgot.
Stan Pretty sure I asked for Pecan Sandies.
Francine Try these Chocodiles.

Phillip: [After Maria threatens Roger] Roger, right? I'm Phillip. I see you've met Maria. Hooh. She is a total c-word. Hey, we're all guys, i'll just say it. Cuckoo-head.
Roger: What was she talking about?
Phillip: Whoever sells the most cars by Friday, wins a week in Hawaii.
Roger: Hawaii? That's where Japan goes to play golf. 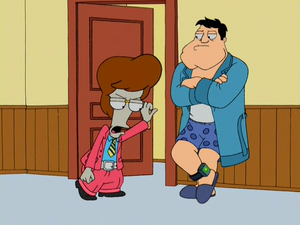 Roger: You guys...save the poop flinging for the cast party.

Roger: Oh look, that monkey has a Hayley on his ass!

Roger: Cops already? What, are we next door to a freakin' Krispy Kreme?
Stan: You're thinking about doughnuts, now?
Roger: No, I'm just sayin' the cops got here fast.
Stan: What the hell do fast cops have to do with a Krispy Kreme?
Roger: Because cops love doughnuts!
Stan: You are not making any sense!

Roger: [to his TV] Don't you die on me, you bastard! You've never given up on anything before! Fight, damn you, fight! [blows into TV, gets electrocuted] Aaaaaahh!

Stan: There's something you should know about me by now, Roger. I don't learn lessons.

Retrieved from "https://americandad.fandom.com/wiki/Rough_Trade/Quotes?oldid=87490"
Community content is available under CC-BY-SA unless otherwise noted.