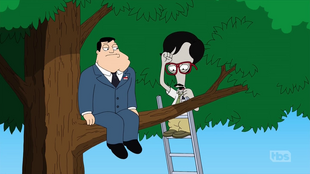 Roots
Stan sets out to stop a tree that he considers his father from being cut down. 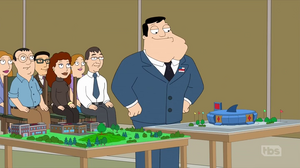 Following the announcement of a new arena football team coming to Langley Falls, the family attends a going out of business sale due to the new arena being built on the site. At a town council meeting about the arena, Stan sets out to rally pubic opinion for the arena until he finds out that a tree that he adopted as his “father figure” is due to be removed as well. Stan is forced to explain about his dad's failure to show for a picnic and he found comfort in a tree at the park.

His testimony sways the council until Roger shows up as the asphalt contractor and makes his pitch to build the arena, turning opinion back in his favor. Stan tries to talk him out of it, getting an agreement to spare the tree but another contractor takes on the project instead. Stan rushes to climb the tree in an effort to stop the bulldozers. A persona of Roger's lets him know that if he can delay the builders a week, the project will be canceled. Stan starts his vigil, facing the wrath of the neighbors who want the arena, as well as thirst, starvation and the weather. As the deadline nears, his family comes to congratulate him, and Stan notices Steve isn't present. 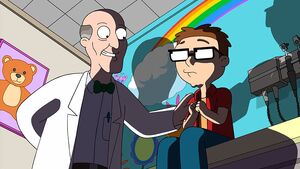 Meanwhile, Steve finds out that he isn't growing when he tries on a suit at the sale. Steve flips out at home, worried that he may never grow again. Klaus suggests a doctor and after Stan blows off giving him advice, he is forced to take Klaus' suggestion. At the doctor's, a sudden change in his personality occurs upon hearing Klaus' name, offering a surgical solution. After thinking things over, Steve decides to have the surgery.

After Stan finds out about Steve's problem, he leaves his tree to be a father to him, letting his tree go. As the doctor begins to operate, Steve starts to have second thoughts after meeting the doctor's creation, Billy, but is knocked out before he can get away. Due to Stan's smashing of the building with a wrecking crane, he faces being dropped from the remains of the building until he is saved by Stan. He takes him to see his tree before it is hauled off, showing him a mark that indicates that the Smiths go through a long period without growth before a significant spurt, and hoping that his tree goes on to a better world. Instead, it is processed into ax handles which are used to chop down other trees, some with protestors in them that have tried to save them.

Retrieved from "https://americandad.fandom.com/wiki/Roots?oldid=78818"
Community content is available under CC-BY-SA unless otherwise noted.