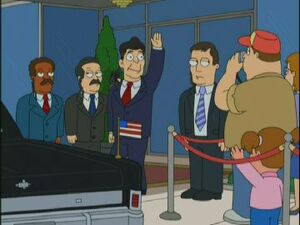 The Reagan assassination attempt occurred on Monday, March 30, 1981, just 69 days into the presidency of Ronald Reagan. While leaving a speaking engagement at the Washington Hilton Hotel in Washington, D.C., President Reagan and three others were shot and wounded by John Hinckley Jr.. Reagan suffered a punctured lung, but prompt medical attention allowed him to recover quickly.

Stan finds out that he altered the past in "The Best Christmas Story Never", resulting in no assassination attempt by John Hinckley Jr. and costing him the 1984 Presidential election to Walter Mondale who promptly surrenders the US to the Soviet Union.

When Stan has to take over filming Taxi Driver, he tries to keep John Hinckley Jr. infatuated with Jodie Foster so he will try to assassinate President Ronald Reagan. When he criticizes Robert De Niro's performance, De Niro walks off the set, leaving John Wayne to take the role of Travis Bickle. John Hinkley Jr. is so unimpressed by the resulting film he is completely turned off of Jodie Foster.

Stan compares George W. Bush to Reagan in his essay in "Bush Comes to Dinner".

Stan includes Reagan in his list of ranchers in "The Magnificent Steven".

Steve correctly guesses Reagan on the first try when playing 20 Questions with Stan in "The Vacation Goo".

Stan sees Reagan and Richard Nixon in his vision of Heaven with Brett Morris in "Dope & Faith".

Reagan is seen in the song "Ollie North" which explains the Iran-Contra affair in "Stanny Slickers 2: The Legend of Ollie's Gold".

On the slam page about Debbie in "Escape from Pearl Bailey", the entire page is a repeated paragraph about Reagan.[1]

Stan goes to Nancy Reagan and interprets her channeling Ronnie's spirit to return Roger's gold medal from the 1980 Olympics in "The Return of the Bling". When things seem darkest, Stan sees a vision of Ronald Reagan circa 1980 and shares a hot dog, but finds out that Ronald Reagan knew about rampant steroid abuse in the Olympics.

Stan Photoshops a picture of Reagan congratulating him on his record of twenty consecutive wrestling wins in "The Wrestler".

Reagan declares the saga of "baby Frannie" the "biggest deal in the world" in "National Treasure 4: Baby Franny: She's Doing Well: The Hole Story". But as he progresses through his speech, he becomes becomes distracted and confused and asks Nancy if it usual for a teenage girl like himself to be disoriented.

Stan has a tattoo of Reagan surfing on his arm in "Honey, I'm Homeland". He later hallucinates him surfing in "Standard Deviation".

Reagan appears on a DVD cover of Stan's life experiences in "The Life and Times of Stan Smith".

In "The Mural of the Story", Reagan appears on the town mural as an example of an upstanding American. When it is defaced by vandalism, Stan proposes a task force to restore it, and uses Hayley as en example of the youth that needed the inspiration. When Stan's group blows the money on a dinner for the group, he tries to restore the mural himself and botches the job.

Retrieved from "https://americandad.fandom.com/wiki/Ronald_Reagan?oldid=85661"
Community content is available under CC-BY-SA unless otherwise noted.