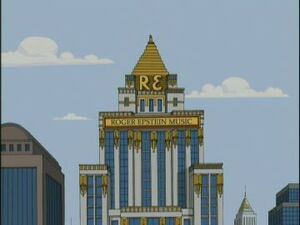 Roger Epstein Music is where Roger's persona of Roger Epstein headquarters his Disco Empire in "The Best Christmas Story Never". At its peak, groups such as the Bee Gees would seek him out. When the era of disco ends in the early 1980s, Business Manager Clive Davis has to tell Roger that he his completely broke.

Retrieved from "https://americandad.fandom.com/wiki/Roger_Epstein_Music?oldid=56320"
Community content is available under CC-BY-SA unless otherwise noted.