For a complete script, see: "Roger Codger" on the Transcripts Wiki

Gertie: [Spits at the statue of Abraham Lincoln] That's for freeing the slaves, you negro-loving Yankee devil!

Gertie:There you are. You send me to get you a churro, and then you disappear. Anyway, here's your filthy wetback donut.

Gertie: Give me back my wig, you scalp-happy red man!

Bullock: Sit down Smith. Our analysists have confirmed that this is none other than the alien that escaped from Area 51, four years ago.
Co-worker: My eyes!
Stan: [accidentally spits coffee on a fellow co-worker] He's alive.
Bullock: Naturally, recapturing this fugitive is our top priority. Then we can track down the bastards that have been harboring it and punish them brutally. [Stan spits coffee again] I mean really brutally, weird stuff, butt stuff. [Stan spits the coffee yet again] Somebody take Smith's coffee. 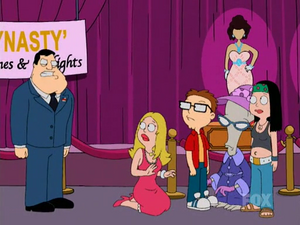 Stan: No one can ever know Roger was here.
Steve: Don't you have any feelings?
Stan: Son, feelings are what women have. They come from their ovaries.
Steve: You're a monster! I have no father!

CIA Therapist: What seems to be the problem?
Stan: Well, I got into an argument with our dog. He expelled a large amount of xenoplasm, and then he died. Am I a monster for not feeling anything?
Therapist: Well it depends, Stan. How close were you to this dog?

Stan: You saved my life. How can I ever repay you?
Roger: You got TiVo?

Steve: Since Dad's a heartless bastard and all, I'm auditioning new father figures. Should I go with outwardly affectionate Tom Hanks, or consistently underrated Jeff Bridges?

[Duper is ready to throw a gernade]
Duper: Lucy, you've got some sploding to do.

Retrieved from "https://americandad.fandom.com/wiki/Roger_Codger/Quotes?oldid=88882"
Community content is available under CC-BY-SA unless otherwise noted.