For a complete script, see: "Roger 'n' Me" on the Transcripts Wiki

Roger: Surprise! [scene cuts to Roger begging to Stan at gunpoint] Look in your heart! I'm praying to you! Look in your heart! You can't do this, it's not right! It's a wrong situation! I couldn't help it, it's my nature. Somebody hands me an angle, I play it. I don't deserve to die for that! You think I do?! This is not us! This is some hop dream. I'm praying to you! I can't die! I can't die out here in the woods!
Stan: What the hell are you talking about?!
Roger: It's from my favorite movie Miller's Crossing. Bravo, Joel and Ethan Coen. I mean, there are some proud parents, huh? Some nachas for the Coens.

Stan: Oh, I've got you a present. [pulls string, pops into a blow up doll] It's an Asian sex doll. Huh? Remember in college you always talked about climbing the Great Wall of Vagina? Ah-ha-ha-ha-ha!
Bobo: Uh, Stan... this is my future father-in-law, Reverend Hideki Hobayashi.
Roger: Oooohhh...

Steve: Now that the seeds of mistrust are sprouting, we must harvest them. [applies headphones and signals Hayley. She dials the number]
Trudy: Hello?
Hayley: Ms. Lawrence, just a few questions for a fitness survey. Where do you typically workout?
Trudy: At the gym.
Hayley: Good, and where is it located?
Trudy: About three miles north of here.
Hayley: After you workout, how do you relax?
Trudy: I get a massage.
Hayley: And when your car is not drive, it's in?
Trudy: Park.
Hayley: And if you're from Brazil, you're...?
Trudy: You're Brazilian? Look, is this a crank call?
Hayley: Hold, please.
Trudy: I can't wait around, I'm leaving to meet-- [Hayley hangs up the phone]
Hayley: Did you get it?
Steve: Got it. [Steve types the phone number on the computer then dials Miles' number, leaving a message on his answering machine]
Machine: Please leave a message. [beep]
Trudy: Hello. Gym.
Miles: Who's Jim?
Trudy: [disjointed] I can't wait to massage your Brazilian crank. Meet me at three at the-- [Steve swipes the record]
Pet Shop Boys: West End
Trudy: ...of the park. I'm leaving Miles.
Miles: She must have dialed my number by mistake. She's cheating on me!

Wendie Jo Sperber: Stan, what is Roger's favorite movie?
Stan: I... I have no idea.
Roger: Sure you do. Look in your heart, Stan.
Stan: Oh, I got it! [Roger smiles with hope. Stan writes] White Chicks!

Stan: Haven't you always wanted to climb The Great Wall of Vagina?

Roger: Stan might be an insensitive feelings-hurter, but he'd never cheat on you.
Francine: It's not Stan I'm worried about. It's the female "entertainment" I don't trust. Men throw a little cash out 'em, they'll do anything. Then sometimes when you're on the floor with another girl, guys'll throw money, then pick it up and throw the same singles out there again. Like I'm an idiot. Like I don't have peripheral vision.

Roger: You got a best buddy? Can I be your second best buddy?
Stan: Let's see, how do I hang an air freshener on this? You are a total waste of space. I often dream of killing you. [inhales] Ah, Mountain Pine.

Greg: That clip was provided by the fun new game show Best Buddiez!
Terry: That's right, Greg. And next week, Best Buddiez! is taping right here in Langley Falls with a grand prize of $200,000.
Greg: And your favorite anchor-partners are gonna be contestants. Because after all, we are just buddies... according to the government. And Terry's father.

Stan: All right! I'm packed and ready to party! Party time! Enjoy your last look at my ass, 'cause I'm gonna party it off!

Stan: Why the hell can't you just let this go?!
Roger: Because you were my first! [cries]
Stan: I had no idea.
Roger: I wanted a buddy, but now I never want to see you again! [leaves the car; Stan starts to drive away, but Roger comes back]
Roger: You were supposed to come after me!
Stan: What?! You crazy psycho-bitch! Leave me alone! 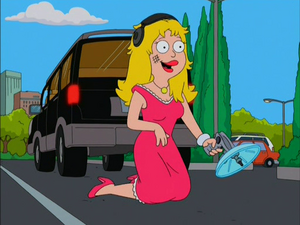 Stan: What the hell was that?
Francine: [after being run over by Stan] I'm not hurt! It's a miracle!
Roger: [to Stan while inside the car] I think you're still on top of it. Back up.
[Stan backs up and runs over Francine again]
Stan: Oh, my God! I hit Francine!
Roger: We should probably leave a note.

Dr. Gupta: Hello, I'm Dr. Gupta. Yes, I'm a woman. I suppose you have a problem with that.
Stan: Uh, no. Is my wife gonna be okay?
Dr. Gupta: Are you questioning my competence?
Stan: No, I'm just concerned about my wife.
Dr. Gupta: Really? 'Cause the way you're looking at me, it seems like you're concerned with something else.

Peter: Okay, Terry, what is Greg's favorite appetizer?
Terry: Oh, that's easy. It's... potato skins!
Greg: No, it's wasabi tuna in a raddichio sauce.
Terry: Even I think that's gay.

Retrieved from "https://americandad.fandom.com/wiki/Roger_%27n%27_Me/Quotes?oldid=87494"
Community content is available under CC-BY-SA unless otherwise noted.