Roger is one of the main characters in the animated comedy series American Dad!. He is a space alien whose appearance resembles that of the greys living with the Smith family. Roger is sarcastic, surly, amoral, self-centered, hedonistic, alcoholic, and dresses up in a variety of personas.

Little is known about Roger's past; Stan recounts how he landed on Earth years ago at Roswell in "Roger Codger". Four years prior to the series, he was incarcerated by the CIA in Area 51, when Stan Smith, then an intelligence officer, was on duty at the base. Tired of living in a laboratory, he escaped his holding cell, thus triggering a lockdown investigation. Stan tracked him down in a kitchen and was about to kill him before Roger pleaded for mercy, but the security team threw a grenade into the room, from which Stan was knocked out and Roger pulled Stan to safety. They slid down a laundry chute into a waiting truck. Grateful to Roger for saving his life, Stan offered to repay him in any way at all, leading to his addition to the Smith family. As a means of convincing the family to let him stay, Stan presented him as a birthday present to Steve for his tenth birthday. While Hayley, Francine and Klaus were initially horrified of him, Steve was delighted to have his own alien. By the start of the series, however, the whole family seems to have come to terms with him.

His planet is never seen or described in-depth, although Roger claims the climate of his home world is 400 degrees colder than most ecosystems of Earth, with the possible exception of Antarctica in "The Most Adequate Christmas Ever". In "Of Ice and Men", he mentions that snow reminds him of his home planet, and figure skating apparently exists there; he has also commented that the planet has stores like Wal-Mart and colleges, in fact, Roger's mothership is revealed to be a giant shopping mall in "Lost in Space". It is revealed in his youth, he was in a relationship with Emperor Zing but cheated on him. For a long time, his reasons for coming to Earth were a mystery as well: he does claim that the reason he came was to collect a sample of hepatitis, although since arriving he seems to mostly be mooching, and seems in no hurry to go back home. In the pilot, he was supposed to try to contact his home world, but got distracted by an "I Love The 80s" marathon. It was revealed in "Weiner of Our Discontent" that he believes he came to earth to be "The Decider", seeing if the planet was worth saving or to destroy it. This belief was crushed horribly when he discovered in his spaceship a note that stated that the ship was a test model and he was in it as a "crash test dummy", meaning his own species had abandoned him on the planet.

Almost nothing is known of Roger's natural family. In "Joint Custody", Roger reveals that his mother suffered from arthritis. He wished his mom could figure out Skype so he could show her his shorts in "The Worst Stan". In "I Am the Walrus", Roger says he ate his own father at 15 and still keeps bits of his leg. Through Steve's former girlfriend Betsy White, Roger has an unborn child that is never mentioned after "Deacon Stan, Jesus Man". During "OreTron Trail", Roger revealed he had visited Earth in the 1800's with his aunt Caroline and she died when he caused her spaceship to crash in the west in the 1800s. In "Persona Assistant", Roger develops a tumor that the Smiths get removed and it become Rogu, a homunculus that his species developed to act like Roku a stand-in doubles when feeling overworked. He mentions in several episodes such as "Max Jets" and "My Affair Lady" to having a nephew, meaning he has a brother or sister. 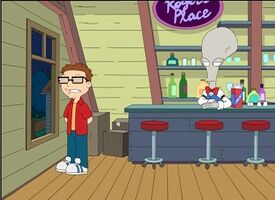 On Earth he creates different jobs for his various personas, such as a psychologist, a bounty hunter, a surgeon, etc. His only stable job, however, is as a bartender in Roger's Place, his bar in the attic, where various members of the Smith family usually congregate. Mostly Roger just deals with the boredom of being cooped up in the attic all day by dressing up in various costumes and creating pretend jobs for him to go to.

Roger can survive under extraordinary conditions, such as the vacuum of space in "Great Space Roaster". He can breathe water in "Funnyish Games" and has his skin and limbs entirely removed in "The Scarlett Getter".

It is shown in "Big Trouble in Little Langley" that Roger's skin is fireproof, although he was still able to feel shock or pain when Stan sets him on fire at the adoption agency, and it did leave his skin darkened. He also reacted with shock and/or pain when he burned his hands on hot turkeys in "Four Little Words". He also showed no sign of pain in "Stan's Food Restaurant" when Stan accidentally held a blowtorch to close to his face, but it did manage to blacken his face.

In "A Smith In The Hand", Roger has 'pockets' in his flesh that he can keep things in and through which his internal organs can be accessed. Also in the same episode, it is shown that when Roger's pancreas is removed, it becomes a vicious beast. Roger's other organs can survive and voluntarily return on their own in "Camp Campawanda".

Roger stated in "Threat Levels" that his species is immune to all human ailments. However, Stan stated in the same episode that he still got a cold sore.

Despite all of this, Roger reveals that he can be killed by cutting off his head in "Exquisite Corpses".

In "One Little Word" and "There Will Be Bad Blood", Roger's blood is shown to be purple. However, in Klaus' fantasy in "Irregarding Steve", it is yellow, and in "Season's Beatings", "Ricky Spanish", "Faking Bad", "Stan-Dan Deliver", and "Twinanigans" it is red like human blood.

Roger is shown in "A.T. The Abusive Terrestrial" to have a long, frog-like tongue, but in "Great Space Roaster", his tongue is forked and more snake-like, and in "Family Affair" and "A Piñata Named Desire", it is more of a long, pointed tongue. He appears to have 4 fingers on each hand and 3 toes on each foot. He is shown in "Oedipal Panties" to be able to swallow an entire banana whole, implying he has no gag reflex. He is an accomplished drummer in "American Dream Factory" due to the fact that he has no bones in his arms. In "Stan-Dan Deliver", Roger claims to have no bones at all in his body, being made entirely of cartilage.

Roger believes that he has a life expectancy of about 9000 years left in "Little Bonnie Ramirez". As he is listed as 1601 at the time, this would put his species at about 12,000 years.

Roger describes himself in "You Debt Your Life" as a "fey pansexual alcoholic non-human". Roger's flamboyant and dramatic nature is enhanced by his alcohol dependency. Roger is frequently childish, showing an affinity for character role-playing, tantrums, and pranks, as well as being quite petty, spiteful, greedy, and cruel. In "Stannie Get Your Gun", he convinced Steve he was adopted in retaliation for Steve having eaten the last cookie, and in "Dope & Faith", he threatened Steve's life by having him employed in a meth lab and convincing him he is at the Hogwarts School of Witchcraft and Wizardry from the Harry Potter novels. In "Tears of a Clooney", he adopted a group of foster children with the intent to use them as slave labor on his vineyard, and when he becomes dictator of a Caribbean island named General Juanito Pequeño in "Moon Over Isla Island", he demanded extravagant and vain services from the populace, such as painting the island yellow.

It is explained in "Frannie 911" that acting in a spirit of human courteousness and general niceness is poisonous to Roger, and he needs to clear his system of unpleasantness or risk death. Roger also has a history of holding grudges as shown in "Great Space Roaster", as he tried to kill the Smith family for insulting him at his Comedy roast, by starting a gas leak causing an explosion, hiring a hitman to shoot them, removing the brakes from Stan's vehicle, and writing death threats to Merlin Olsen for seven years after Father Murphy was canceled.

Despite his faults, Roger genuinely cares about the Smith family and in "Roger Codger", he was willing to allow Stan to kill him when they were cornered by the CIA, in order to prevent them from torturing him into telling them which family had been hiding him. In the same episode, it was revealed that Roger had risked being blown up in order to save Stan even though he'd only just met him. Roger also once admitted that he wasn't a fighter, indicating that he was aware of his own weakness.

Roger is also shown to be a dangerous sociopath committing theft, various drug offenses and many counts of murder throughout the series. In "Virtual In-Stanity", he kills five people plus a planeload of innocent victims for twenty dollars and mentions killing six others for nineteen dollars. In "Toy Whorey", he allowed Francine to be struck by a wrecking ball in order to have her steak as well as his own, and when asked by Klaus if Francine was dead, he showed no concern of any kind. 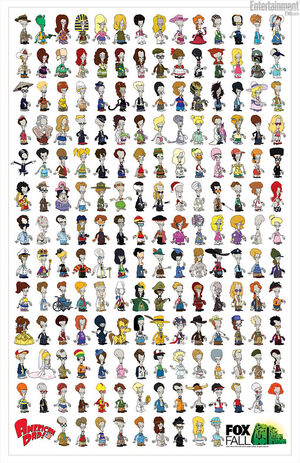 Roger has a large book in his attic room filled with the names of all the people he knows and the aliases they know him as, as well as a seemingly never-ending carousel of outfits. Almost everyone besides the Smith family cannot tell one of Roger's disguises from another although "Stanny Tendergrass" shows that even among the family there are disguises that fool the Smiths. In "Joint Custody", he says he hates disguises, then a few scenes later says he loves disguises, and introduces the "Roger Fashion Montage!". In "Oedipal Panties", his carousel of thousands of outfits is shown. In addition, in the opening sequences of episodes, Roger will appear in the car in one of his disguises from past episodes and then be pushed back down in the car by Stan. Some of his disguises are:

Wheels and the Legman

See: Wheels and the Legman