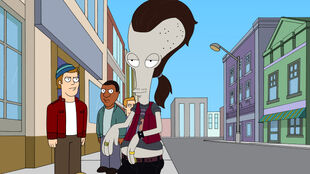 Roger's Disguise: Morning Italian from "Don't Look a Smith Horse in the Mouth" 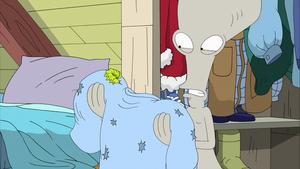 After caterpillars chew holes in most of Roger's disguises, Roger rediscovers an outfit buried in a trash bag in the back of the closet. But when he walks through town drawing hated stares, he stops at a motel and is assaulted by Brian Lewis and is reminded that he is now Ricky Spanish, the most hated man in town. Roger has Steve bring him another outfit and tells about how Ricky has ruined everyone's life. Using one of the caterpillars he placed into a jar as a metaphor for changing, He helps Ricky try to make right with all of the people he wronged. Stopping by Brian's houseboat, Brian recalls how Ricky knocked him out and left him penniless and without ID in Tijuana and later at Bullock's house he has to remind a coked-up Bullock of how he killed his wife. Both easily forgive him.

Next on the list is Daniel, a former partner-in-crime that he let take the fall in a sweater heist. After getting Daniel out of jail, Steve stops Daniel from killing Roger/Ricky on the spot insisting he has changed. But at a Burger Joint, Roger secretly reveals to Daniel that he has another heist plan and Steve will take the fall for this one. Borrowing Brian Lewis' houseboat and guns from Bullock, they arrive at the docks where Steve learns of the plan and is knocked out by Daniel who hits him with a gun. Steve comes to after a short time and tries to stop them but the guards are alerted and give chase. When Steve starts to fall from a stack of shipping containers, he is caught by Roger who steals his wallet before letting him drop and be beaten by the guards below and Ricky and Daniel take off. Steve spends time in prison before being freed by Stan and Francine while the butterfly in the jar emerges but dies in captivity. 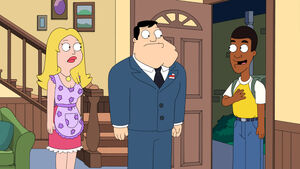 Meanwhile, Stan and Francine are in for a surprise when Tungee, their sponsored child from Africa shows up on their doorstep. While not even sure if he was real, they had sent encouraging letters inviting him to someday come live with them. His enthusiastic attitude leads them to ditch Tungee at a Costgo. But back at home, they begin to have regrets about what they have done and rush back, finding Tungee and promising never to leave him again. But on the ride home, his perkiness reminds them of how annoying he was and they leap out of the car, allowing it to roll down the road with Tungee still inside staring in horror from the rear window.