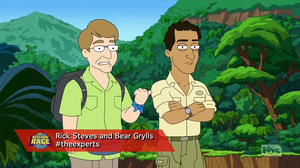 Rick is mentioned twice in "Bahama Mama" as the host of Rick Steves Glory Hole in Europe and by Roger who suggests he can be sucked through a hole and called Rick Steves.

Performing as himself, Rick is teamed up with survival expert Bear Grylls in "The Bitchin' Race". After having won all of the challenges to date, they take an early lead headed for Thailand. Stan invokes a temporary partnership, which results in them being shipped off to Antarctica in an animal crate.

Retrieved from "https://americandad.fandom.com/wiki/Rick_Steves?oldid=73707"
Community content is available under CC-BY-SA unless otherwise noted.