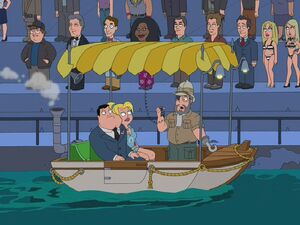 Richard Tiffany Gere is an American actor. He began acting in the 1970s, and came to prominence in 1980 for his role in the film American Gigolo, which established him as a leading man and a sex symbol. He went on to star in several hit films including An Officer and a Gentleman, Pretty Woman, Primal Fear, and Chicago, for which he won a Golden Globe Award as Best Actor, as well as a Screen Actors Guild Award as part of the Best Cast.

Richard Gere appears as one of the celebrity robots in "Tearjerker".

Retrieved from "https://americandad.fandom.com/wiki/Richard_Gere?oldid=52076"
Community content is available under CC-BY-SA unless otherwise noted.