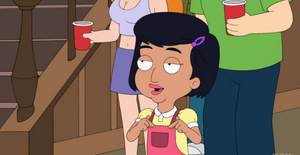 Reshma is an Indian transfer student who had been allowed to skip at least two grades to attend Pearl Bailey High School. In "License to Till", Steve is instructed by Roger to become popular by beating up a weaker student, even though from her greeting suggests they are friends. However, the plan fails to gain Steve respect when he beats up Reshma, a girl a few years younger than him, as Roger didn't realize he needed to inform Steve should only beat up a boy. Later at a party after Steve has become popular, Reshma slaps him before she kisses him at the party and promises him first chance at her breasts when they mature.

She makes another appearance in "Home Wrecker", coming to Principal Lewis over the concern of the class' sick gerbil, which he quickly knocks out of her hand saying "think fast" and appears at the carnival in "Why Can't We Be Friends?".

Retrieved from "https://americandad.fandom.com/wiki/Reshma?oldid=75974"
Community content is available under CC-BY-SA unless otherwise noted.