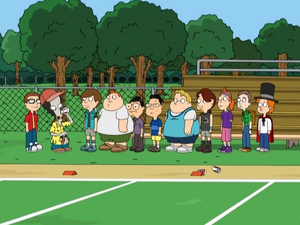 The Replicants is the name of the football team that Roger and Steve form in "Every Which Way But Lose" when Steve is cut by Stan from his pee wee football team. Their first year they went 1-15. The team members include Barry, Snot, Toshi, Cheese, Hubert & Li-Fung and the Amazing Rufus. The teams full official name, "Nexus Six Series Replicants", is named after the android-like machines that Deckard (Harrison Ford) chases in Blade Runner. The team loses all of its games until they play Stan's Wolverines. To beat Stan's team, Roger smears Steve with splooge to make him too slippery to grab until he runs dry. Roger devises a last trick play where he has the Amazing Rufus make the football disappear and the Wolverines believe Steve has it while Rufus sneaks it into the goal.

Retrieved from "https://americandad.fandom.com/wiki/Replicants?oldid=89120"
Community content is available under CC-BY-SA unless otherwise noted.