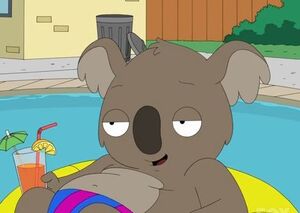 Reginald the Koala introduces the back story of Reginald Koala first seen in "Family Affair", of a homeless man nicknamed Reggie, whose brain is switched with a koala. He becomes a more regular character in the series, often hanging around Hayley to the point it appears they have both developed feelings for each other.

A snippet of the song plays again in "The Return of the Bling".

Reginald didn't have a job

The weather was changing, he looked like a slob.

But then one cold, dark winter day

Came along an opportunity.

So he followed the address

to get his free meal

On the surface it looked like a helluva deal.

But when he took his first bite, they put the helmet on tight

And he heard the hum of a hundred-million watt laser

Reginald: It was scary y'all

Reginald, and he used to be nothing

Reginald, and he used to be nothing