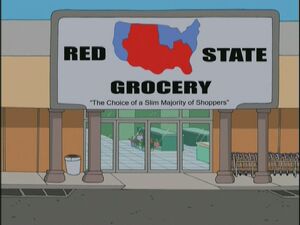 The Red State Grocery is where Francine does most of the family shopping on Wednesdays.

While shopping with Linda Memari in "Not Particularly Desperate Housewives", Francine admires the Ladybugs. After seeing a gruesome accident where a shopper is killed by runaway shopping carts, Francine plans on going to an art show to try to get in good with the ladybugs. When a misunderstanding causes them to believe Francine is having an affair with the valet. They reveal to Francine the true nature of their organization: they cheat on their husbands. Francine receives a ladybug brooch and tries to maintain the fiction of her affair with the valet.

However, Francine does not want to cheat on Stan, nor does she involve the valet in her charade. When Francine refuses to show her lover to the Ladybugs, she asks to leave the organization. The Ladybugs refuse, because they fear Francine could betray their secrets, and they have no secrets on her with which to counter-blackmail her. They tell her they wouldn't want her to wind up like Anne Flemming who was crushed by the shopping carts in the beginning of the episode. When she runs to the manager for help, he grabs her and holds her for the Ladybugs to catch, saying he likes to help people. They prepare to kill Francine at the supermarket parking lot the same way they killed Anne, but she is saved in the nick of time by Linda, who passionately kisses her so that the Ladybugs think that Francine's affair is with a woman. Believing that they have a good enough counter-blackmail they leave her alone with a warning.

Francine is caught by the paparazzi Stan hires outside of the Red State Grocery in "Tears of a Clooney".

Stan eats all of the free samples of pizza snacks in "Less Money, Mo' Problems" while trying to live on minimum wage in order to prove to Hayley and Jeff Fischer that it could be done, running afoul of Jonah & Rebecka.

Steve works at the grocery during the summer in "Permanent Record Wrecker". After Stan is released from the CIA in favor of cheaper agents, he is also hired. Steve is promoted to assistant manager shortly after, but Stan sabotages his work and gets him fired.

Stan takes shelter and hides from scavenger in the ruins of the grocery in "The Two Hundred".

Retrieved from "https://americandad.fandom.com/wiki/Red_State_Grocery?oldid=67111"
Community content is available under CC-BY-SA unless otherwise noted.