For a complete script, see: "Red October Sky" on the Transcripts Wiki

Principal Lewis: We have a winner! The fat kid and his creepy Russian uncle or something.

Stan: Where would a communist go? Cuba? China? Back in time to kill Betsy Ross? 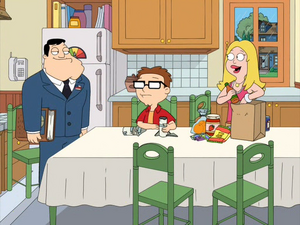 Sergei: Let me tell you a little story, Stan. I truly believed in Communism, Smith...and I was raising my son to be a true party member. But then Communism fell and the wall came down. My wife, who had the strong, plain features of a turnip, left me...for a West German tennis equipment salesman. And my son...my young son...he became an entrepreneur. He makes Halloween costumes for dogs!

Sergei: You see, I dreamed of coming to Langley Falls, Stan...because I vowed...the west stole my son, so I will steal your son...for Communism!
Stan: That'll never happen! Steve's an American boy. He's made of my American juices, baked in his mother's American oven.

Retrieved from "https://americandad.fandom.com/wiki/Red_October_Sky/Quotes?oldid=89106"
Community content is available under CC-BY-SA unless otherwise noted.