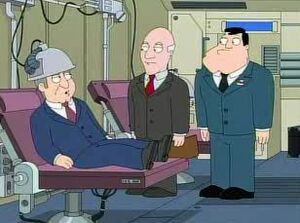 Ray is one of Stan's co-workers at the CIA.

In "42-Year-Old Virgin", Ray is shown as one of Stan's poker buddies along with Bad Larry. He recalls every meal he ate after killing someone. His very first kill was Johnny Damone which he celebrated with an egg salad sandwich.

Ray is part of the Alien task force in "Office Spaceman".

Ray switches brains with Osama bin Laden's cat Buffy in "Brains, Brains and Automobiles". Deputy Director Bullock finds out she thinks he smells bad and tries to win her over. When that fails to impress Buffy he decides to play tough with her. Ray had an unhappy marriage because his wife thought he was boring when their kids moved out and advises Stan that the same could happen to him.

Stan shafts Ray out of a plumb assignment of demonstrating a new urban assault vehicle due to his age in "Old Stan in the Mountain". He gets the last laugh when Stan annoys the wrong geezer into placing a curse on him to make him age and thus causes complete chaos trying to drive the vehicle during the demonstration.

Ray is seen near the CIA Chill House's hot tub in "Can I Be Frank (With You)", during "He's Got a Kink" in "The Missing Kink" and is "banished" by Stan in "Morning Mimosa".

He is one of the savage survivors in "The Two Hundred" and participates in the "evil Santa" CIA gift exchange in "Gift Me Liberty".

Ray is voiced by Victor Raider-Wexler.

Retrieved from "https://americandad.fandom.com/wiki/Ray?oldid=88624"
Community content is available under CC-BY-SA unless otherwise noted.