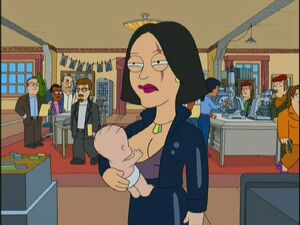 Raina Markovitz is a former Soviet spy Stan hires in an effort to break George Clooney's heart for Francine in "Tears of a Clooney". Stan thought she became a mother but she reveals that business has been so slow for her she has to rent herself out as a 'wet nurse'.

She has a cameo in "Phantom of the Telethon".

Raina is voiced by Paget Brewster.

Retrieved from "https://americandad.fandom.com/wiki/Raina_Markovitz?oldid=52111"
Community content is available under CC-BY-SA unless otherwise noted.