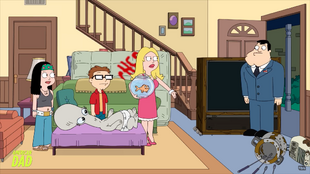 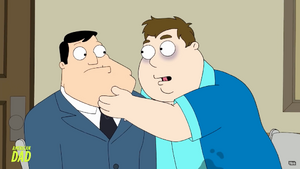 The night before bulk trash is picked up, Stan goes out checking to see if anything good is being thrown away. He finds an old-fashioned large screen TV and drags it home along with other trash, much to the family's displeasure. Annoyed with their lack of appreciation, he moves his haul to the basement. When he finally gets it to work, he watches an old show that doesn't seem to have any programming information. After failing to receive any help from the television station, he is directed to a support group where he finds Tuttle is the only member present. Tuttle explains that he has documented various changes to the show, even though it shows the same episode every night. Stan dismisses this information until he happens to see Tuttle in that night's episode. Visiting Tuttle's house, he finds a similar television with the back removed and a dropped notepad with a message about going in. Back home, his own investigation documents various changes from night to night as well.

Opening up the back of the television, he finds it projects a static doorway onto the wall, which allows him to pass through to the show. There, he finds Tuttle, who is slowly losing his memory of his real life. But when they jog the memory of another guest who tries to leave, when the show cuts to commercial and the lights dim, he can be heard screaming and is no longer found when the lights return. They are ordered by the host to play along, or a similar fate awaits them. They briefly manage to escape and return to the real world, but when they step through the door of the Smith home, they are right back on the set. Stan and Tuttle proceed to stay with the show as their memories start to fade, but a fondue pot reminds Stan of Francine, and with his memory returned, he breaks character. The host smashes him into the wall and promises a worse fate as soon as the show goes to commercial, but Stan's damage to the wall reveals a static portal similar to what brought him there. Clawing his way through with Tuttle behind him, they get back to his basement, but the now monstrous host almost gets them again until Tuttle unplugs the television. 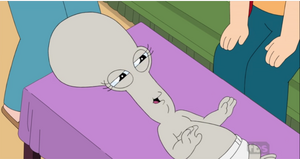 Meanwhile, Roger, who was along with Stan on his search, finds an old crib and diaper and reverts to a baby, which the rest of the family finds irresistibly cute. However he soon dominates their every moment.

Stan wanders upstairs where he finds the entire family seemingly back to normal, but when their speech patterns turn stiff and they talk about jazz, it's revealed that American Dad! is a show that is taking place on the basement television and the whole family is trapped.

Retrieved from "https://americandad.fandom.com/wiki/Rabbit_Ears?oldid=83477"
Community content is available under CC-BY-SA unless otherwise noted.