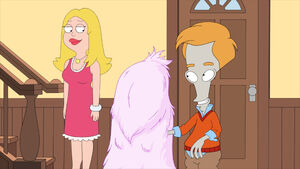 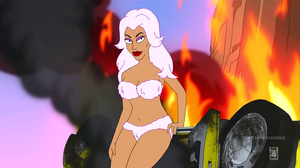 Qurchhhh is a female alien who crash-lands on Earth after she believes she was attracted to Roger's pheromones in "Blagsnarst: A Love Story". Her body is covered head to toe with thick platinum-blonde hair; without it she resembles a normal, attractive Earth woman. Everyone pronounces her name by making a thick rasping sound in the back of the throat.

When Roger and Francine stumble on her crashed spaceship in the woods, Roger becomes attracted to her due to her pheromones just as she is to his. When he and Francine take Qurchhhh home to meet Stan, he becomes worried that he has to kill her due to the CIA's ongoing search for Roger and other aliens, unaware that the CIA is conducting an investigation at her crash site as they speak.

Her flirting with Roger leads them to have wild sex, but when they are done, Roger is ready to dump her while she is making plans for their living together. Roger becomes desperate enough to trick her into going to a bed and breakfast where he plots to turn her over to the CIA. When Stan finds out, he points out that they will discover the Smith family is keeping Roger and he decides to turn her loose, wher she is promptly cornered by the CIA helicopter. Improvising a high-powered rifle out of a stone, some sticks and bubble gum, Roger takes out the helicopter and frees her. But when she starts her plans for them to be together again, he bails out of the car which crashes over a cliff and bursts into flame, burning off her excess hair as she assumes a new identity as Kim Kardashian.

Qurchhhh is voiced by Kim Kardashian.

Retrieved from "https://americandad.fandom.com/wiki/Qurchhhh?oldid=75383"
Community content is available under CC-BY-SA unless otherwise noted.