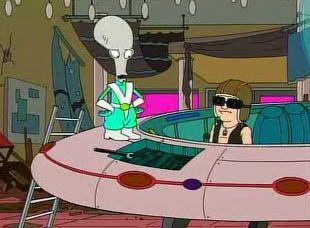 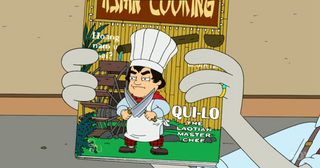 Qui-Lo is Roger's assistant mechanic and co-pilot for his spaceship in "Rapture's Delight" when they try to escape Earth.

Qui-lo appears again in "Stan's Food Restaurant" as a Laotian master chef that Roger hires to run Stan's new restaurant before Roger takes over the operation. When Stan opens a competing restaurant next door, he hires Qui-Lo away from Roger.

In both appearances, he and Roger are shown bickering, to which Stan will say: "Lovers quarrel?"

in "The Unbrave One", Roger and Qui-Lo bicker while trying to fit Steve into a super hero suit to help him prove his bravery, Steve think one dislikes the idea of a cape but Roger claims they both like capes, they're just arguing over who loves them more.

Retrieved from "https://americandad.fandom.com/wiki/Qui-Lo?oldid=67735"
Community content is available under CC-BY-SA unless otherwise noted.