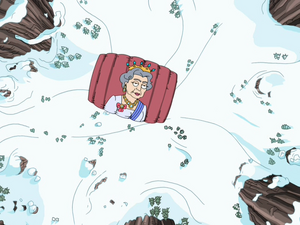 Queen Elizabeth II (Elizabeth Alexandra Mary; born 21 April 1926) is the constitutional monarch of 16 sovereign states known as the Commonwealth realms, and head of the 54-member Commonwealth of Nations. In her specific role as the monarch of the United Kingdom, one of her 16 realms, she is also Supreme Governor of the Church of England.

Her likeness appears on the parachute worn by the British spy in "Tearjerker". She also appears on a poster of suspected lizard people in "Paranoid Frandroid".

Retrieved from "https://americandad.fandom.com/wiki/Queen_Elizabeth_II?oldid=76531"
Community content is available under CC-BY-SA unless otherwise noted.