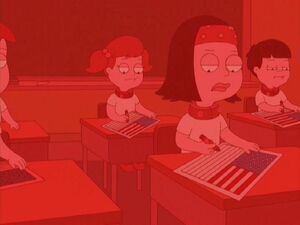 Project Daycare is a CIA project of brainwashing sons and daughters of CIA Agents and train them into professional sleeper agents.

The children wear neckbands, and if they do something wrong, these neckbands will possibly be activated, electrocuting the wearer as punishment.

Project Daycare focuses on younger children. After their training is complete, they forget about having the training. However, as an adult, Hayley dreamed of a Project Daycare classroom.

The project was abandoned after they discovered that if an agent were activated for more than seven days, they turn on their handler and attack, killing their handler.

In "Haylias", Stan activates Hayley using the key sentence: "I'm getting fed up with this orgasm". Hayley is under full control of Stan, but after the seven day deadline is up, Hayley's programming backfires and she tries to kill Stan.