To start a complete script, see: "Poltergasm" on the Transcripts Wiki

[having witnessed footage of a scary ghost version of Francine]
Roger: [to a recorder] 3:43. Just peed myself. [pauses, then continues] Asparagus. 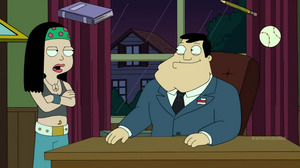 Hayley: [to her dazed father] Dad, you have to snap out of it! You gotta get mom where she needs to get to!
Stan: I can't, Hayley! I don't know what to do! If only there was some sort of kindly robot or magic wand that could pleasure my wife. But we live in the real world.
Hayley: Dad, look around you! The ghost is getting stronger! You have to satisfy mom.
Stan: You're right. But I clearly don't know what I'm doing anymore!
Hayley: You just need to get some help. A book or the internet...
Stan: Or an oversexed hippie who just happens to be my daughter. Hayley, you are gonna be my sex coach.
Hayley: [after a moment of pause] Well, that really backfired on me, didn't it?

Ruby: Hm, all this talk of satisfying's made my girdle all gooey!...I think I'm wearing it wrong.

Ruby: This problem is far worse than I first thought. Your mother's poltergasm, trademarked, has got Mauricio in its claws, like that claw game at arcades, except, you know, if the claw was strong and didn't drop things, so pretty much not that claw game.
Hayley: Ruby, are you saying there's no way to get Mauricio back?
Ruby: I'm sorry, child. But this spirit is not gonna be satisfied until your mother is. And since your father isn't up to the task, I'm not sure who is.
Steve: Well, ah. [adjusts his pants]
[Ruby and Hayley stare at him]
Steve: Oh no, gross! I just need a new belt!

Francine: Oh my, Hayley, who's your swarthy, chiseled friend?
Hayley: Mom, this is Mauricio.
Mauricio: We are benefits.
Francine: Benefits?
Hayley: He means we're friends with benefits, but we're not friends.

[Roger and Steve play Operation]
Roger: What the hell? Steve, I did not touch the rim.
Steve: Yes you did; the board buzzed.
Roger: I've performed this very operation far drunker and on real people.

Rita Rudner: Do you know the difference between a government bond and a man? The bond matures.

Roger: [Into tape recorder] Three-forty, no sign of the ghost. Really have to pee but don't want to miss anything.

Steve: Is anyone else still seeing his junk when they close their eyes?
Francine/Ruby: [Eyes closed] Yeah.

Ruby: The entity in this house was born specifically out of Francine's sexual frustration. I like to call it a poltergasm. [Gestures with his finger]
Steve: What are you doing?
Ruby: I just drew a trademark sign with my finger, child, because I've registered the word "poltergasm." Any movie scripts you write based on your experiences here, Ruby gets a slice.

Stan: This looks just like our anniversary suite; it even smells like it.
Ruby: This beach scented candle from CVS is guaranteed to grease the beef or your money back, but I stole this one, so don't try to return it.

Crew Member: American Dad! is filmed in front of a live studio audience.

Stan: [Cigar in his mouth] I just acted so heterosexual that I needed something phallic in my mouth to even things out.

Spirit: No one shall find release until I do!
Hayley: Dad, what did you do wrong?
Stan: I don't know. Probably everything.
Steve: Well, you're gonna have to give it one more money shot!

Klaus: You guys need to be like a government bond and mature.
Hayley: Klaus, that's pretty funny. Did you just think of that?
Klaus: I've been thinking about it for a few days.

Retrieved from "https://americandad.fandom.com/wiki/Poltergasm/Quotes?oldid=88432"
Community content is available under CC-BY-SA unless otherwise noted.