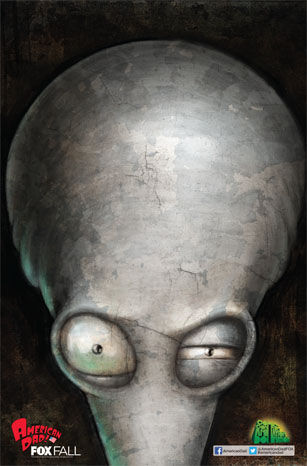 Poltergasm
Francine deals with the ghost of her unsatisfied sex drive. 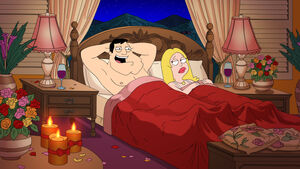 After an unsatisfactory bout of sex for Francine, the lights go out and she hears Hayley making out with her new sex-friend Mauricio. As they leave, a picture drops off the wall which Francine dismisses and returns, and it bursts into flame as she walks away. Klaus heads out for a conference while Roger plays games with Steve. Roger notes that he has observed strange happenings and points out a game hovering over their head. They set up cameras and observe the house, spotting a spirit of Francine on the washing machine which turns demonic before their eyes as it lunges toward the camera. 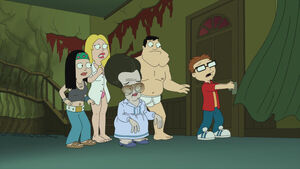 Roger and Steve share their findings with the family, including a skeptical Stan until he is physically attacked. Roger's persona of Ruby Zeldastein arrives just as Mauricio is sucked into a vortex by the spirit. Ruby explains that the spirit is born out of Francine's sexual frustration. Stan is doubtful and Francine tries to back him up but admits she isn't completely satisfied and he eventually realizes the truth. Tracing things back in her memory, she realizes she faked things for the previous two years which upsets Stan. Trying to rescue Mauricio, the spirit drags him back. Ruby tells them that the spirit won't be satisfied until Francine is. Stan is in a funk and has trouble dealing with things until he hits on having Hayley become his sex coach. Hayley and the rest of the family prepares him by teaching him about foreplay and prepping the bedroom to reenact their anniversary suite. When the kids awake the next day, they find the house back to normal and Francine and Stan both feel satisfied, although Hayley is suspicious that Mauricio didn't return as the house dissolves into a vision from Hell around them. Determined to get Francine to orgasm, Ruby fills Stan full of Mexican Viagra although it still doesn't work and Francine admits that what they needs is for Stan to slow down rather than rush. They slowly work together until Francine orgasms, returning things to normal and freeing Mauricio.

At the conference hotel, Klaus hurts his back watching the local information channel, leaving him stuck for hours watching the same clips over and over.

Retrieved from "https://americandad.fandom.com/wiki/Poltergasm?oldid=79224"
Community content is available under CC-BY-SA unless otherwise noted.